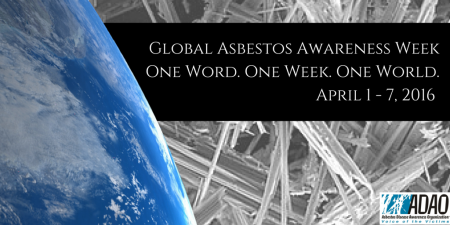 Each year, ADAO dedicates April 1-7 to increasing awareness of asbestos and preventing exposure by bringing together experts and victims from around the world to share, learn, and take action.

Asbestos is a known carcinogen and there is no safe level of exposure. Since the 19th century, asbestos  was widely used in construction, shipbuilding, and the automotive industry. Without a ban, asbestos remains legal and lethal in the USA and nearly 70% of the world today. Since founding the Asbestos Disease Awareness Organization (ADAO) in 2004,  we have worked with the U.S. Senate to unanimously pass 12 Asbestos Awareness Week Resolutions and secured four U.S. Surgeon General asbestos warnings in an effort to prevent exposure to eliminate deadly asbestos-caused diseases. Dedicated to awareness and prevention, during Global Asbestos Awareness Week, each day features educational resources from leading organizations, guest blogs, videos, and asbestos victims’ stories.

It is exciting to see the global community unite and collaborate for Global Asbestos Awareness Week. Thank you for joining us during this week of learning and community! Please follow the week via our website and through social media using #GAAW.

Alan’s Story, “I’ll Do Anything to Fight Mesothelioma to Have More Time with My Family, Anything”

Lou’s Story, “I Will Not Die in Vain”

Mavis’ Story, “I fight on for All for All our Meso Warriors Past, Present, and Future”

Heather’s Story, “The Value of My Life in Dollars and Tears”

Quincy Jones, Comedian Dying Of Cancer, and His HBO Special

Day FIVE – April 5:  Find Out Where Asbestos Might Be Lurking in Your Home, Community, or Workplace

Day SIX – April 6: Remember the Dead and Fight Like Hell for the Living

Mike’s Story “The Opportunity to Grow as a Person”