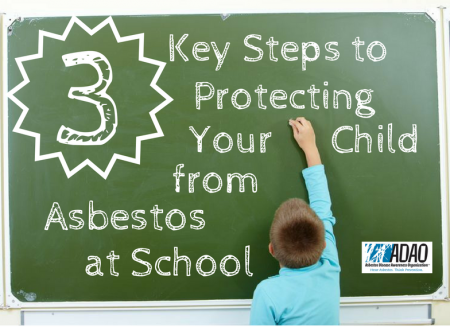 The 2019 school year is here-along with the excitement of new classes, friends, and supplies! But although we expect our children to be safe at school, there is one thing we parents often mistakenly overlook that could be harmful to our kids: Asbestos.

In 2017, I published a Huffpost article — “3 Key Steps to Protecting Your Kids from Asbestos at School” — discussing the prevalence of asbestos in schools in the United States. Now, two years later, more than 50 million students from kindergarten through 12th grade and seven  million teachers as well as other workers in more than 131,000 public and private school facilities are still at risk of exposure to legacy asbestos: the asbestos still-present in American buildings from twentieth  century constructions.

Asbestos is among the most dangerous minerals ever mined and/or used and is responsible for nearly 40,000 American deaths every year. Managing the public risk of exposure  becomes more imperative when we factor in the fact that our children are spending the majority of their time in buildings that possibly contain asbestos. The Environmental Protection Agency (EPA) Office of Inspector General (OIG) report published in 2018, states, “Asbestos exposure risk is higher in children because they are more active, breathe at higher rates and through the mouth, and spend more time closer to the floor where asbestos fibers can accumulate.”

Unfortunately there has been no change since I last wrote about asbestos in schools. Below is a checklist that is still relevant in ensuring your loved ones stay safe from asbestos during the upcoming school year:

Asbestos is prevalent in our nation’s schools. Asbestos has not been banned in the U.S., and without a ban, asbestos-contaminated products are imported and sold throughout the country. Many of these toxic products are meant for kids, from toys and crayons to makeup. Be aware  of what your kids are playing with — both at school and at home — especially products made in China, where asbestos is still mined and heavily used in manufacturing.

Parents can also use ADAO’s recently released report titled “EPA’s Failure to Ban Asbestos: The Impact from 1989 – 2019 on Public Health, Environment, and the Economy” to educate themselves on the dangers associated with asbestos exposure, industry’s continued use and government exemptions, and policy history in hopes of answering complex questions surrounding asbestos.

Unfortunately, our school children, teachers, and staff remain at risk, in large part due to lack of awareness and poor enforcement. For example, although the EPA has primary responsibility for enforcing AHERA, from “fiscal years 2011 through 2015, the EPA conducted 13 percent of AHERA inspections, whereas states with jurisdiction over their own inspections performed 87 percent.”

Ask your school administrators, district officials, and school board what steps they have taken. If you do not get direct and concrete answers, keep asking. You have a right to this information, and your children have a right to protection.

The EPA issued “The ABCs Of Asbestos In Schools” to help parents and teachers. Print this out and share it with your school administrators and other parents.

If your school has a PTA or other sort of parents’ group, consider raising this issue with them. Few among us have the time to fully address such a complex, obscure issue on our own, but as a team we can develop a manageable action plan. Strength in numbers is especially important when protecting our kids requires us to stand up to authority.

This information may seem daunting, but asbestos-caused diseases are 100% preventable. Together with the proper tools, we can minimize our children’s risk of asbestos exposure.

Through  awareness, education, and collaborative action, we can take charge of this issue and better protect our families. Contact your school administrator today and see what you can do to make sure our future generation is safe.