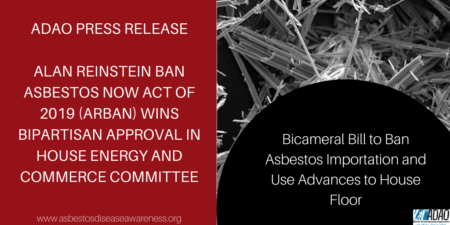 WASHINGTON, DC – The Asbestos Disease Awareness Organization (ADAO) applauds the Committee on Energy and Commerce of the U. S. House of Representatives, for its bipartisan vote (47-1) to approve the bicameral Alan Reinstein Ban Asbestos Now Act of 2019 (ARBAN). The bill now moves to the floor of the House of Representatives for passage and then to the Senate for its consideration.

“This comprehensive bill will protect workers, consumers, and children from being exposed to the deadly threat of asbestos and stop hundreds of tons of asbestos from entering the United States,” said Linda Reinstein, President of ADAO and widow to the bill’s namesake. “It is past time for the U.S. to join the nearly 70 countries that have banned asbestos to protect public health and future generations from this known carcinogen.”

“ARBAN heads to the House floor with bipartisan support and we look forward to its swift passage. We anticipate strong support in the Senate,” Reinstein shared.

Each year, nearly forty-thousand Americans die from preventable asbestos-caused diseases, including mesothelioma, and cancers of the lung, larynx, and ovaries.