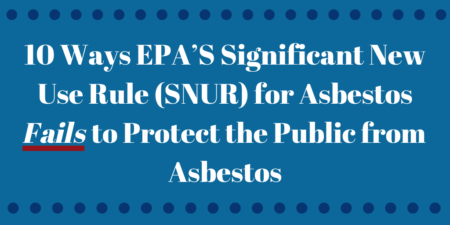 On April 17, 2019, the EPA issued  a significant new use rule (SNUR) for asbestos under the Toxic Substances Control Act (TSCA). This rule is not a ban. In fact, it falls woefully  short of taking meaningful action to protect public health. The Asbestos Disease Awareness Organization, the largest asbestos-victim advocacy organization released this list of the 10 ways the SNUR fails to protect public health.