With the effectiveness of our Global Asbestos Awareness Week Campaign on April 1–7, we have received several significant stories that are critical for us to share. This week, we would like to honor the two related stories of Subrayan and Murgesan (India). Their stories are shared to us by Mohit Gupta, a GBAN member, who has also written a blog post detailing the tragic case study of Gujarat Composite Ltd, at which these two individuals worked. In addition, their stories reflect the need to protect workers’ safety. Join us on April 28th as we celebrate an international event: Workers’ Memorial Day. 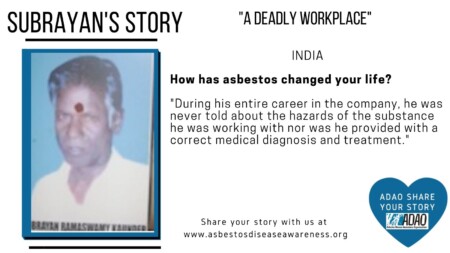 Subrayan Started work in Gujarat Composite Cement Ltd on 1 March 1974. His routine job involved manually opening the plastic Asbestos Bag (Capacity 50 KG) and to put the asbestos in the mixing machine. He started experiencing breathing problems in 1995. He underwent a medical check-up through the ESI Panel Doctor who diagnosed the problem as TB and started his medication. The company closed down in 1995 but restarted its operations in 1999 where in Subrayan was placed in the sheet cutting division. He worked till 2005 when the company because of his deteriorating health condition compelled him to take voluntary retirement. He then vacated his home in East Digvijat Nagar and shifted to Meghani Nagar. During his entire career in the company, he was never told about the hazards of the substance he was working with nor was he provided with a correct medical diagonosis and treatment

He experienced many difficulties in his new place. he did not have any income or job. The family used to survive on the money received through the pension fund and his wife used to do manual work in near by homes and earn about Rs 1000 per month.

In July 2007 his health deterieated and was admitted in the Civil Hospital. However there was no improvement in his condition and his case was referred to the Gujarat Cancer Research Institute on 13-8-2009. The cost of treatment here was very high. Due to lack of money an application was filed with the Local MLA Shri Pradeep Singh Jadeja for help. This was forwarded on 27-8-2009 to the Director Gujarat Cancer research Institute and hence the treatment started. After about a year on 9-7-2010 he died leaving behind his mother (68 years), wife (43 years old), Daughter (16 years – had to leave studies after matriculation), 2 sons (elder 14 years –had to leave studies after 9 class, younger 11 years studies in 6th class)

Today his wife and elder son have a food stall using which they sell food to different area to earn their livelihood and support the family. 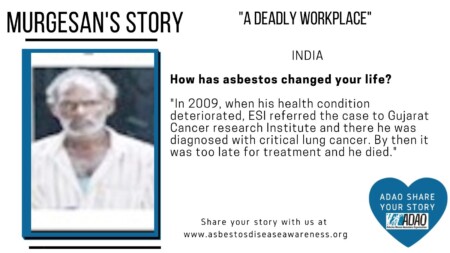 Murgesan was a laborer in the company. He was suffering with breathing difficulties and used to take medication for TB. OSHA and Kalyaneshwari did a medical survey in 2003/2004 and Dr S R Kamath certified him to be suffering from Grade 2/2 Asbestosis.

However, ESI Corporation did not give him compensation based on this certificate. To avail compensation again on 6-6-2006, another X Ray was taken and Dr V Murlidhar certified Asbestosis and also said that cancer is suspected. In 2009, when his health condition deteriorated, ESI referred the case to Gujarat Cancer research Institute and there he was diagnosed with critical lung cancer. By then it was too late for treatment and he died on 11-3-2009.

He is survived by Wife, son, daughter who is married. Son has refused to file compensation claim with the company fearing loss of his own job (he works in the same company handling the same hazardous substance).