A Global Call to G20 Summit Leaders to Ban Asbestos

On November 30, representatives from 19 countries and the European Union will be gathering in Buenos Aires, Argentina for the annual G20 forum, the world’s preeminent economic conference. The purpose of the summit, which is the culmination of a yearlong series of meetings, is to gather the world’s key economic players to address issues relating to global economic growth, international trade, and the regulation of financial markets.

While there will certainly be much talk about markets, labor and more, I feel it is important that these leaders speak about the fact that seven of the G20 nations; Brazil, China, India, Indonesia, Mexico, Russia, and the U.S. are still mining, exporting, importing, and/or using asbestos, a known and deadly carcinogen.

It is a known fact that there is no safe or controlled amount of exposure to asbestos. Since 2006, the World Health Organization has recommended that the most efficient way to deal with asbestos and its associated risks is to stop using all forms of the deadly mineral. The irrefutable facts in the USA are that both asbestos imports and asbestos-linked deaths have increased in 2018. 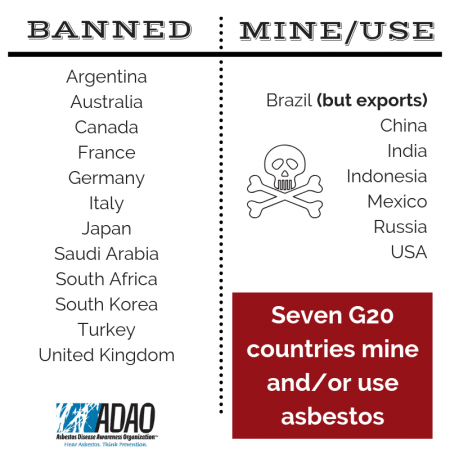 The ban asbestos movement is capitalizing on this opportunity to hold global leaders accountable, and we’re making use of one of our greatest assets to do so: solidarity. On November 23, more than 50 experts and nonprofits from around the world signed on to the Asbestos Victims Association of Belgium G20 Summit letter, “A call to G20 leaders for global action to ban asbestos.” Calling for “decisive action to ban asbestos worldwide,” the letter is an unflinching, bold call to action from some of the world’s most esteemed medical professionals, public health experts, legal scholars, and advocates.

In addition to the G20 Summit letter, ADAO has also taken this opportunity to communicate our concerns directly to President Donald Trump and Russian President Vladimir Putin in a letter  discussing the facts about deadly asbestos use. It is reprehensible that the U.S. imports hundreds of tons of raw asbestos from Brazil and Russia for the chlor-alkali industry.

As the G20 leaders gather in Argentina to address the world’s most pressing issues, the ban asbestos movement stands together urging Brazil, China, India, Indonesia, Mexico, Russia, and the U.S. to ban asbestos now.