This week, we would like to honor the story of Moe, as shared by his sister, Lana, who is a part of our ADAO family.

(shared by his sister, Lana)

Treatment: Cytoreductive Surgery (CS) and Hyperthermic Intraperitoneal Chemotherapy (HIPEC).  However, his body was too weak for that surgery and his vital organs started to shut down. 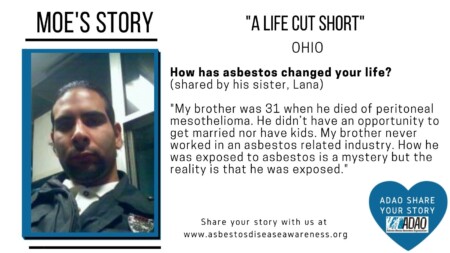 My brother was 31 when he died of peritoneal mesothelioma.  He didn’t have an opportunity to get married nor have kids.  My brother never worked in an asbestos related industry.  How he was exposed to asbestos is a mystery but the reality is that he was exposed. My brother received his diagnosis in November 2010. We were told that surgery was the only option and it had to happen ASAP. That surgery was scheduled the day before Thanksgiving.   Without the surgery, he was given six months to live.  My brother only had a miserable six weeks after his diagnosis where we watched him suffer and deteriorate away. In a few short months, the symptoms came on and when doctors finally figured it out why, my brother’s chances of getting better were slim. He survived the surgery but his body’s vital systems started to shut down. A month after the surgery we had lost him.

My brother was in great shape, ate healthy and worked out.  He never took a sick day off from work until the last week in October when he was admitted to the hospital for the first time.  I think about the precious time that passed between his first admittance to the hospital, or the two after that, and his surgery a month later and I wonder if an earlier diagnosis would have made a difference.  Would he have had a better chance of at remission or would he have had more time with us?  What if we knew more about mesothelioma before the doctors told us surgery was the only option? My brother was full of life and everyone that ever knew him loved him. This disease took him away from us and our lives (especially our mom’s), will never be the same again.