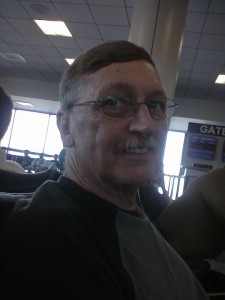 This week, we would like to honor the story of Marvin, as shared by his daughter Jamie, who is a part of our ADAO family.

How has asbestos changed your life? Asbestos has changed my life tremendously!! My Dad, Marvin, got sick in early 2010. He was diagnosed a few times as having pneumonia. Finally, the last time he was said to have it, his doctor sent him to get the fluid drained, which was in September of 2010. After the fluid was drained, they tested it and said he had cancer and it was thought to be Mesothelioma. I was absolutely devastated and so was my Mom and brother, as well as the rest of our family. On October 4, 2010, my Dad had a biopsy done and it was confirmed he did have Mesothelioma.

He was assigned an oncologist and a pulmonary doctor. When he went for his appointment, he was not satisfied with the doctor’s opinion on what he should do…my Dad wasn’t willing to just give up!! He researched and talked to a few other doctors and they had recommended he try UCLA for treatment. So that’s what he did and was accepted into a program they have. In November of 2010, he flew out to California for his first appointment. They started Chemotherapy along with a clinical trial drug. He received chemo and clinical drug until March of 2011. His surgeon he picked, who was also located in California, did a different kind of surgery besides removing the lung. Dad went April 28, 2011 for his surgery..he was in surgery for 7 hours. The doctor removed a 5 pound tumor along with alot of my Dad’s chest wall. The doctor found some in his lymph nodes also.

In June 2011, my Dad started radiation which seemed to suck the life out of him! We returned home to TN July 23, 2011. He continued to get worse and was hospitalized September 12, 2011 and passed away September 15.