Skip to content
Home/Blog/ACTION ALERT Stop The FACT Act! Call and Urge Your Congressional Representative to Vote NO on H.R. 982

ACTION ALERT Stop The FACT Act! Call and Urge Your Congressional Representative to Vote NO on H.R. 982 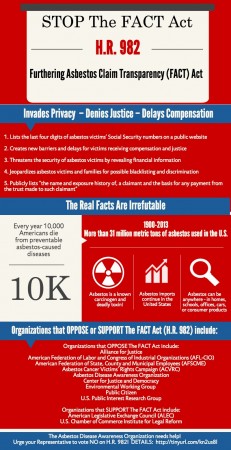 ADAO needs your HELP today! I am going to Congress next week to ensure our voices are heard.  I will be telling Members of Congress and the media about our mesothelioma battles and how asbestos-caused diseases impact our families.

Why? Because the FACT Act is designed to make it even more difficult for asbestos victims to receive justice in court and hold asbestos corporations responsible for the harm their products have caused. Adding insult to injury, it would also violate asbestos victims’ privacy by releasing sensitive information on a public website.

Here are some of the consequences for asbestos victims and their families if the FACT Act is passed:

3.        Threatens the security of asbestos victims by revealing financial information

4.        Jeopardizes asbestos victims and families for possible blacklisting and discrimination

5.        Publicly lists “the name and exposure history of, a claimant and the basis for any payment from the trust made to such claimant”

The Asbestos Disease Awareness Organization (ADAO) has been an outspoken opponent of the FACT Act since it was first introduced in 2012. As we know all too well, asbestos is still legal and lethal in the U.S.  Asbestos disease claims more than 10,000 American lives each year and imports continue.  That’s a fact.  But that number does not include the families and children left behind with no means of financial support.

Take action by following these steps today to ask your Representative to vote NO on H.R. 982! MAKE ALL CALLS BY TUESDAY NOV 12th BEFORE 6PM EASTERN STANDARD TIME as the House vote will probably be on Wednesday, November 13th.

My name is XX and I live in your district.

I’m calling to ask that Representative XX vote NO on H.R. 982. This bill hurts asbestos victims by helping corporations that have profited from asbestos to delay and deny justice to the victims and their families. It also puts asbestos victims’ privacy at risk.

H.R. 982 does not protect Americans hurt by asbestos.  To this day, asbestos is still lethal and legal the United States and kills more than 10,000 Americans every year.  Corporations knew asbestos was deadly by the 1930s, but the asbestos industry hid the facts, and continued to expose workers and their families to its dangers, putting millions at risk for serious and deadly diseases.

Congress should focus on keeping Americans safe from deadly products, not protecting corporations that deliberately put workers and consumers in danger.

Organizations that OPPOSE the FACT Act include:

American Federation of Labor and Congress of Industrial Organizations (AFL-CIO)

Center for Justice and Democracy

Organizations that SUPPORT the FACT Act include:

Remember: every voice counts, and every action makes a difference. If you tweet about the FACT Act, please include #noFACTAct.