Posted on November 12, 2013: ADAO Brings the “Voice of the Victims” to the House Staff Briefing in Opposition of the FACT Act 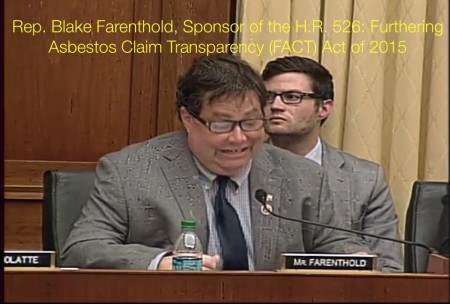 If only Congress could move this fast to ban asbestos!

ADAO has been at the front-line of legislative efforts to protect public health and victims’ civil rights for more than ten years.  It feels like Groundhog day, as this is the third time the bill has been introduced.  I remember like it was yesterday when Sue Vento and I sat in the U.S. House of Representative Gallery in 2013 and watch the bill pass the House on a 221-199 vote that split mostly along party lines, as the Republicans held the majority in the House.

More than 10 asbestos victims also attended. Rep. John Conyers (D-MI 13th District)  argued that the legislation is “invasive,” and that it will make victims “more vulnerable to the public.”  Rep. Hank Johnson(D-GA 4th District) called it “a Trojan horse piece of legislation,” and agreed with our position that it is not fair that no victims were invited to speak. While the opposition argued that the legislation would prevent people from cheating the system, Mr. Inselbuch stated that, “It’s not difficult for a mesothelioma victim to prove they have mesothelioma. And God bless them, they do suffer.” And both Rep. Conyers and Rep. David Cicilline said that they received our letter, so it’s good to know that our voice has been heard.

ADAO urges Congress to focus legislative efforts to end this man-made disaster instead of protecting those who have knowingly harmed and killed innocent people.

You can read testimonies from the four witnesses below.

Please help us spread the word by sharing this blog, tweeting to your followers, and making your voice heard.  Remember: Every voice counts, and every action makes a difference. If you tweet about the FACT Act, please include #NoFACTAct.

ADAO agrees with Congressman Johnson that the FACT Act (H.R. 526) is “morally reprehensible.”