Press Release: EPA Violated TSCA by Refusing to Require Industry to Report on Importation and Use of Asbestos ||  ADAO and Five Leading Organizations Take Strong Position in Federal Court 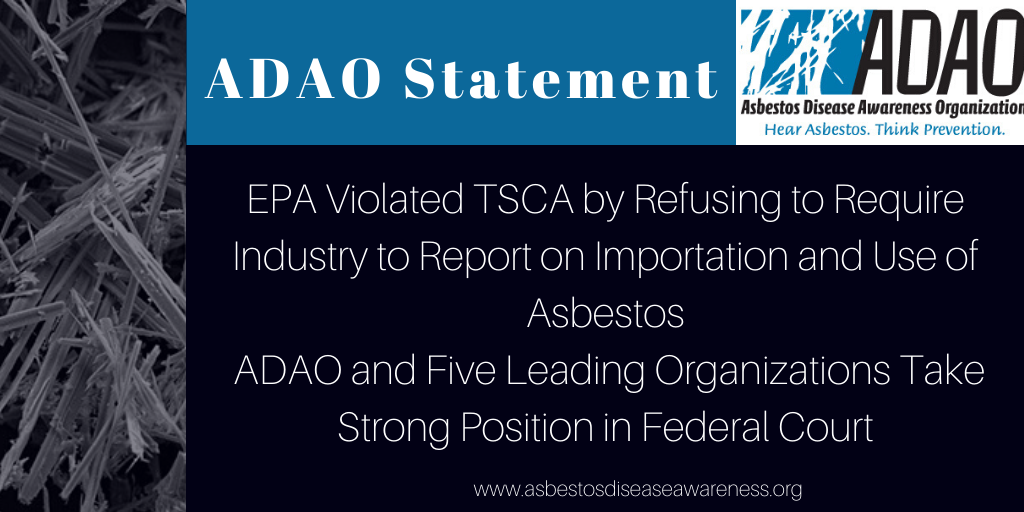 “In 2018, we told EPA that they couldn’t conduct a rigorous evaluation of this lethal substance on the basis of sketchy and anecdotal information, but they didn’t listen,” said Linda Reinstein, president and cofounder of ADAO. “EPA’s dangerously narrow draft asbestos risk evaluation, released this April, vindicates ADAO’s position and confirms EPA does not know the quantities of asbestos-containing products being imported, where and how these products are used, and how many workers and consumers are exposed. in fact, EPA’s own Science Advisory Committee on Chemicals voiced deep concerns during their June public meeting about the lack of basic facts about asbestos, a problem EPA could have solved if they simply granted ADAO’s petition,” she continued.

“The summary judgment motion demonstrates EPA’s refusal to require reporting deprived it of fundamental information that it needed to understand asbestos use and exposure in the US and that, without this information, EPA cannot conduct a sound asbestos risk evaluation under TSCA,” noted Robert Sussman, ADAO counsel. “EPA’s petition denial was unlawful because the record overwhelmingly demonstrates that EPA needed reporting for a scientifically credible risk evaluation on asbestos under TSCA. Although EPA’s stubbornness has cost it precious time, it is not too late for the Court to direct EPA to undertake rule making to fill the information void on asbestos created by the Agency’s refusal to act,” he concluded.

This case, pending before Judge Edward Chen in the US District Court for the Northern District of California, challenges EPA’s February 2019 denial of the groups’ citizens petition under section 21 of TSCA to add asbestos to the Chemical Data Reporting (CDR) rule, which applies to thousands of chemicals but exempts asbestos despite its serious dangers to human health.

The ADAO case has been consolidated with a suit by 17 Attorney Generals (AG’s) who also petitioned EPA unsuccessfully to require TSCA reporting on asbestos. The AG’s have also moved for summary judgment.

The court has set a September 1st response deadline and scheduled a hearing on the motions for November 12th.