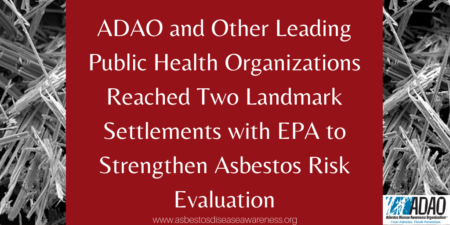 We are thrilled to announce that this week, the Asbestos Disease Awareness Organization (ADAO) and other leading public health organizations and scientists reached two landmark legal settlements with the Environmental Protection Agency (EPA) that strengthen and broaden its work to evaluate the health risks of asbestos under the Toxic Substances Control Act (TSCA).

These settlements clearly show that the Biden EPA has recognized the need to fix the flaws in the incomplete and un-protective risk evaluation conducted by the Trump Administration.

The January 2021 final risk evaluation released by Trump’s EPA was narrow in scope, omitted five asbestos fibers and several asbestos-related diseases, and generally understated asbestos risks. The evaluation failed to include an assessment of the risks of legacy asbestos uses and disposal, despite a 2019 court decision requiring EPA to address these pathways of exposure under TSCA. These shortcomings were of significant concern to scientists and others filing comments and were heavily criticized in the peer review report of the independent Science Advisory Committee on Chemicals (SACC).

The first settlement resolves ADAO’s January 26, 2021 challenge in the Ninth Circuit Court of Appeals to the agency’s Part I Asbestos Risk Evaluation. ADAO filed this case in conjunction with leading public health groups and scientists because the many gaps and omissions in the Part 1 Evaluation violated TSCA, ignored the best available science, and failed to provide the public with a full picture of the risks of this deadly carcinogen.

A more robust and comprehensive evaluation will finally help us document the severe and deadly harm that asbestos continues to cause Americans. Over 40,000 Americans die each year from asbestos-caused illnesses. The last time EPA attempted to ban asbestos was in 1989, and since then, over one million people in America have died due to asbestos exposure, which causes mesothelioma and cancers of the lung, larynx, and ovaries. There is no safe level of exposure.

Meanwhile, in the second settlement, EPA and ADAO entered into a consent decree to resolve ADAO’s May 18, 2021 suit in the U.S. District Court for the Northern District of California to require the Agency to carry out its obligation to evaluate the risks of “legacy” asbestos found in millions of buildings and in consumer products across the United States by December 2024.

The Trump EPA failed to address the deadly and often hidden threat asbestos poses in schools, factories, commercial buildings, homes, and consumer products across the U.S, dangerously underestimating the risk of legacy asbestos. Now, the Biden EPA is stepping up to carry out this long overdue task.

Both of the two settlements were built upon a June 7, 2021 settlement between EPA and ADAO in which the Agency committed to rulemaking under Section 8 of TSCA to require reporting on asbestos use and exposure. The settlement followed a 2020 ruling that EPA’s failure to require reporting violated TSCA and the Administrative Procedure Act. The information that EPA collects under the new reporting rule will make a valuable contribution to the Part 2 Asbestos Risk Evaluation.

ADAO is pleased to share quotes from the important co-petitioners and colleagues who made this landmark victory possible.

“It’s been a difficult challenge to get EPA to give the attention to this lethal substance that it deserves but these settlements are finally giving us a credible path forward for completing EPA’s risk evaluation that will assure that it addresses all pathways of exposure and known health effects and takes a hard look at the ongoing risks of legacy asbestos present in millions of buildings across the US.” Bob Sussman, ADAO Counsel

“The American Public Health Association is extremely pleased with the two important asbestos-related legal settlements that were reached this week between public health advocates, including APHA, and the U.S. Environmental Protection Agency,” said Georges C. Benjamin, MD, Executive Director, the American Public Health Association. “These settlements are critical steps to ensuring the agency moves forward with strong and comprehensive actions under the Toxic Substances Control Act to protect the public’s health from asbestos exposure and its negative and even deadly health impacts. We thank the Asbestos Disease Awareness Organization and other public health organizations, experts and legal team involved in helping to achieve these important public health victories in our ongoing battle to protect the public from this dangerous substance.”

“Millions of people have suffered from lung damage due to asbestos exposure, even as we continue to confront a global pandemic that threatens our ability to breathe,” said Michael Green, CEO of CEH. “It’s long past time to ban deadly asbestos, which has killed so many people already.”

“Today’s settlement has been a long time coming, and is a tribute to the tenacity of partners like ADAO who refuse to give up the fight to protect our families and communities from asbestos. We look forward to EPA filling the gaping holes in its earlier asbestos evaluation, and to the recognition of the unacceptable danger from its use in our families’ homes, our kids’ schools, and in workplaces across the country.”  Liz Hitchcock, Director of Safer Chemicals Healthy Families.

“As a partner with ADAO I applaud the wisdom of the EPA in understanding the veracity of our claims and reaching a meaningful settlement in our lawsuit, giving hope that progress will be  made in banning this dangerous material.”  Arthur L. Frank, MD, PhD, Professor of Public Health and Chair Emeritus of the Department of Environmental and Occupational Health at the Drexel University School of Public Health in Philadelphia.

“This new ruling represents a victory for the people of the United States in ensuring that all risks from exposure to asbestos are addressed by regulatory agencies inclusively and correctly.” Richard A. Lemen, Former Assistant Surgeon General of the United States.

“It’s a relief that the EPA is more reasonable under the new administration.” Barry Castleman, ScD, author of Asbestos: Medical and Legal Aspects

“I congratulate the Asbestos Disease Awareness Organization in having successfully persuaded the courts and the EPA to follow the clear and unambiguous scientific evidence and take strong action reduce exposure to asbestos across the United States. These actions will save thousands of American lives.” Philip J. Landrigan, MD, MSc

“Congratulations on your magnificent landmark settlements with the EPA forcing the agency to strengthen its environmental
risk evaluation of the harmful effects of exposure to asbestos. ¥our dedication and courage in pushing for this over so many years shows how a determined individual can influence others to work for the public good. You have my heartfelt admiration.” Paul Brodeur, longtime staff writer at The New Yorker and author of “Expendable Americans” – 1974, “The Asbestos Hazard” – 1980, and “Outrageous Misconduct: the Asbestos Industry on Trial” – 1985

And a massive thank you to ADAO’s Counsel, Bob Sussman. Bob’s tireless efforts and legal expertise were critical to making this win happen, and we are forever grateful for his support.

Together, we are making a difference.