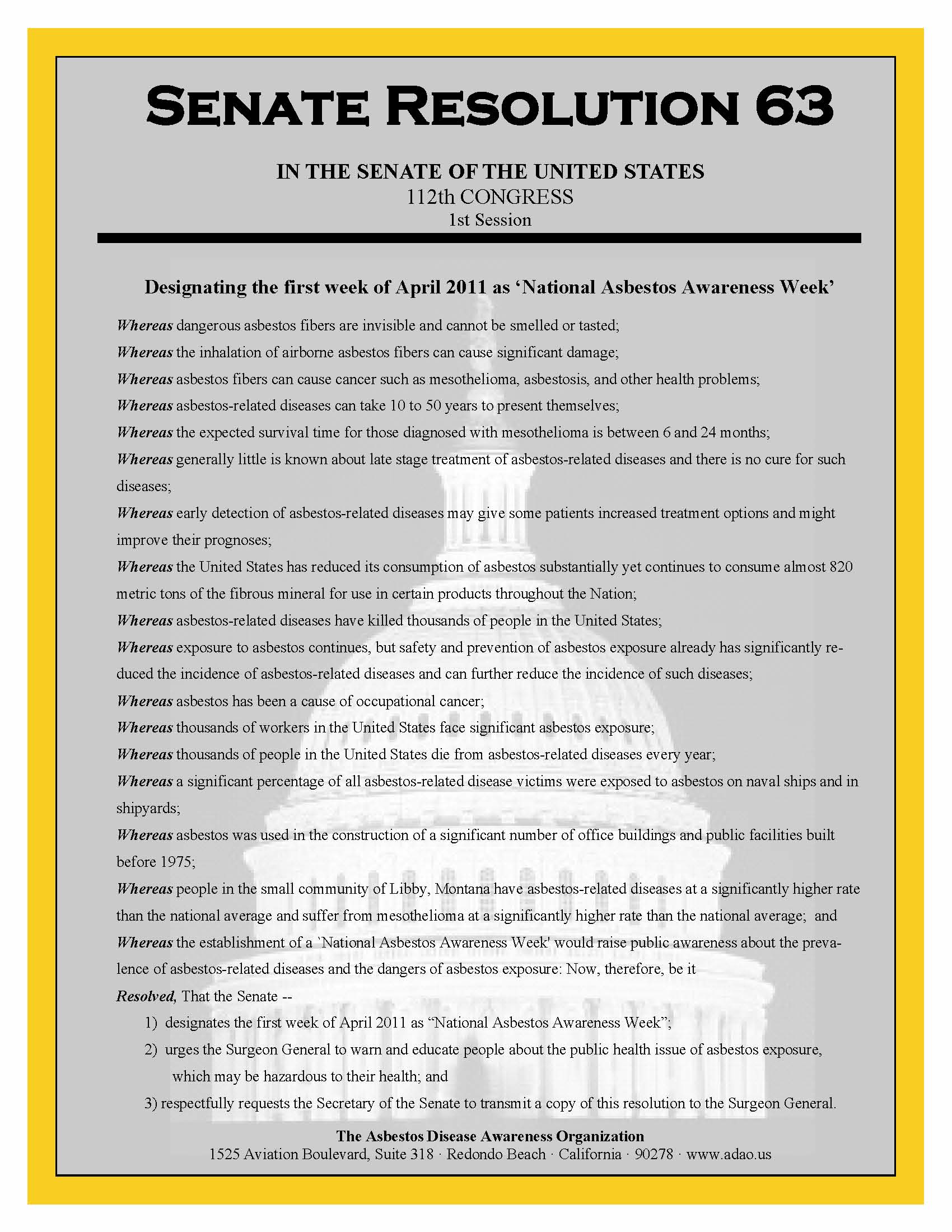 Washington, DC … March 10, 2011 — The Asbestos Disease Awareness Organization (ADAO), combining education, advocacy and community as the largest U.S. organization serving as the voice of asbestos victims, today applauds Senator Max Baucus (D-MT) and cosponsors for passing a resolution that declares the first week of April as “National Asbestos Awareness Week” and seeks to “raise public awareness about the prevalence of asbestos-related diseases and the dangers of asbestos exposure.”

In addition, with increasing interest from across the world, 2011 marks the first year that this week will be recognized as “Global Asbestos Awareness Week”. What started as a day has grown into a full week of international activities incorporating education, advocacy and community driven efforts to fuel a worldwide ban on asbestos and provide resources and hope to asbestos victims and their families.

“Asbestos Awareness Week is a rallying cry to keep the tragedy of Libby from happening again. It’s also an opportunity to remind people that much more work lies ahead to help victims of asbestos-related diseases,” said Baucus, who was instrumental in urging the EPA to declare its first ever public health emergency in Libby. “Although we can never fully right the outrageous wrong that took place in Libby, we can fight to make sure the community has the tools it needs to heal. And, we can keep working hard to make sure the public is aware of the tragic impact of asbestos exposure.”

The World Health Organization reported that in 2004, asbestos-related lung cancer, mesothelioma and asbestosis from occupational exposures resulted in 107,000 deaths and 1,523,000 DALYs.  Disability-adjusted life year (DALY) is defined as the measure of overall disease burden expressed as the number of years lost due to ill-health, disability or early death.

“But these aren’t just numbers; these are individuals, families, and friends who have been impacted by preventable deadly diseases,” stated Linda Reinstein, President and Co-Founder of the Asbestos Disease Awareness Organization. “ADAO applauds the U.S. Senate for its passage of the Seventh Annual Resolution recognizing National Asbestos Awareness Week, and we are extremely excited that our educational campaign entitled Exposed – The Facts about Asbestos –  has gone global this year. The time is now, and together, change is possible.  Join us on Facebook where we are “Turning Anger Into Action” and online at ADAO.”

Asbestos is a known human carcinogen and exposure can cause asbestos-related diseases, including mesothelioma, lung cancer and asbestosis. Studies estimate that during the next decade, 107,000 workers around the world will die of an asbestos related disease – equaling 300 deaths per day.