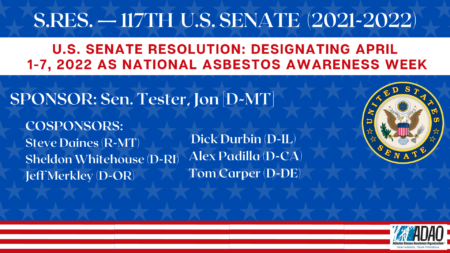 Led by Senator Jon Tester (D-MT), the week is intended to raise public awareness about the prevalence of asbestos-related diseases and the dangers of asbestos exposure. The resolution to establish this public health awareness week passed unanimously.

“We know there is no safe level of asbestos exposure, but most Americans don’t know where asbestos might be in homes, schools, workplaces, or on consumer shelves. National Asbestos Awareness Week will help educate the American public about the ongoing threats from asbestos exposure,” she continued.

“Asbestos has a long, troubling history in Montana, and too many families continue to suffer from exposure to this toxic substance,” said Senator Tester. “It’s past time we outlaw the use of asbestos, but as we continue cleanup efforts in places like Lincoln County, it’s critical that we arm folks with the most up to date information possible so that we keep people safe, and make asbestos exposure a thing of the past.”

“We must continue to raise awareness about the dangers of asbestos exposure and help promote the health and well-being of Montanans across our great state,” Senator Daines said.

Asbestos, a known carcinogen, which claims the lives of over 40,000 Americans every year. Prevention from exposure remains the only cure,  yet without a ban, imports and use continue in the United States.

“We urge the United States Congress to continue its important work to protect Americans from asbestos by introducing and passing the Alan Reinstein Ban Asbestos Now bill which would end imports and use of asbestos across the country and save lives from entirely preventable illness and death,” said Linda Reinstein, widow of the proposed bill’s namesake.

The full text of Tester and Daines’ resolution is available HERE.

The Asbestos Disease Awareness Organization (ADAO) was founded by asbestos victims and their families in 2004. ADAO is the largest non-profit in the U.S. that is dedicated to providing asbestos victims and concerned citizens with a united voice through our education, advocacy, and community initiatives. ADAO seeks to raise public awareness about the dangers of asbestos exposure, advocate for an asbestos ban, and protect asbestos victims’ civil rights.