With Mesothelioma Deaths on the Rise and Impending EPA Risk Evaluation, the 2017 Resolution Takes on Heightened Significance 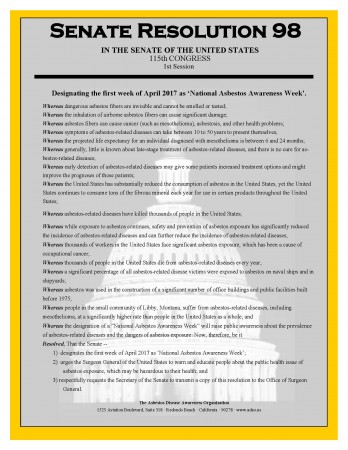 “We are enormously thankful to Senator Tester, resolution co-sponsors, and the entire Senate for establishing the 13th Annual ‘National Asbestos Awareness Week.’ Each year, up to 15,000 Americans die from preventable asbestos-caused diseases while imports continue. Undoubtedly, the resolution’s momentum and U.S. Surgeon General’s asbestos warning will raise awareness and save lives.

“Now, more than ever, it’s crucial to raise asbestos awareness to ensure the American public understands that this is not an issue of the past. New data from the Center for Disease Control and Prevention (CDC) reports that asbestos-caused deaths are on the rise in the U.S., despite significantly decreased use since peak consumption in the 1970s. Further, the study reports that malignant mesothelioma deaths among patients aged 25-44 continue, indicating current and continued occupational, environmental, and secondary exposure risk.

“As the EPA begins its risk assessment of asbestos under TSCA, it is paramount that the Senate underscore what we’ve long known about asbestos — that it poses undue risk to human health and the environment and must be stringently regulated to avoid causing more harm. This has been the sentiment of the last 12 Senate Asbestos Awareness Resolutions as well as 12 warnings from the U.S. Surgeon General’s office, and just last summer President Barack Obama became the first sitting president to acknowledge asbestos as a deadly carcinogen. Especially with the onslaught of legislation aimed at eviscerating or limiting the powers of the U.S. Environmental Protection Agency (EPA), this acknowledgement by the legislative branch sends a significant message.”

This year, ADAO is partnering with UK-based public relations firm the McOnie Agency to take Asbestos Awareness Week global! Educational materials will be translated into six languages for international distribution. ADAO will hold its 13th Annual International Asbestos Awareness and Prevention Conference “Where Knowledge and Action Unite,” April 7 – 9, 2017 at the Renaissance Arlington Capital View Marriott in Arlington, VA, just outside of Washington, D.C. Global experts will speak on the latest advancements in asbestos disease prevention, treatment for mesothelioma and other asbestos-caused diseases, and global asbestos ban advocacy.

Exposure to asbestos, a human carcinogen, can cause mesothelioma, lung, gastrointestinal, colorectal, laryngeal, and ovarian cancers; as well as non-malignant lung and pleural disorders. The Global Burden of Disease, Injuries, and Risk Factor Study of 2013 published in the renowned Lancet Medical Journal reported that 194,000 people globally die from asbestos-caused diseases every year, equaling more than 500 deaths per day.