Skip to content
Home/Blog/ADAO Asbestos Mortality Report from 1991 – 2019 || The Dark Truth about Asbestos: Over One Million Americans Have Died from Preventable Asbestos-Caused Diseases Since EPA Tried to Ban Asbestos

ADAO Asbestos Mortality Report from 1991 – 2019 || The Dark Truth about Asbestos: Over One Million Americans Have Died from Preventable Asbestos-Caused Diseases Since EPA Tried to Ban Asbestos 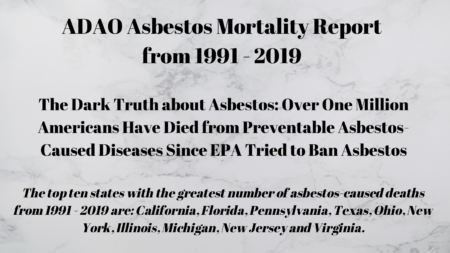 The first clinically recorded case of an asbestos-induced lung disease was recorded over 100 years ago, in 1906. Dr. Montague Murray at London’s Charing Cross Hospital diagnosed a 33-year old man who had worked in an asbestos textile plant for 14 years with asbestosis. Since this original diagnosis, physicians and researchers established that asbestos exposure causes multiple potentially-fatal diseases including asbestosis, mesothelioma, and cancers of the lung, larynx and ovaries.

According to the World Health Organization (WHO), “All types of asbestos cause lung cancer, mesothelioma, cancer of the larynx and ovary, and asbestosis (fibrosis of the lungs). Exposure to asbestos occurs through inhalation of fibers in the air, in the working environment, ambient air in the vicinity of point sources such as factories handling asbestos, or indoor air in housing and buildings containing friable (crumbly) asbestos materials.”

However, it is hard to track the number of lives lost. Therefore, for the first time, the Asbestos Disease Awareness Organization (ADAO), an independent nonprofit dedicated to preventing asbestos exposure through education, advocacy, and community, has put together state-by-state data from IHME to show how many lives have been lost from 1999 to 2019 to preventable asbestos-caused illnesses. According to IHME, these deaths were occupational, caused by diseases including asbestosis, larynx cancer, tracheal bronchus, lung cancer, ovarian cancer, and mesothelioma. People of all ages lost their lives to these illnesses.

Over the years, nearly 70 other countries have banned asbestos, but the United States lets imports and use continue. In the article “Invited Perspective: Eliminating Toxics to Prevent Disease: Asbestos Leads the Way,” authors David Kriebel and Douglas J. Myers opened by saying, “Countries that have consumed more asbestos have historically had higher mortality rates from asbestos-related diseases (ARDs) than countries with lower asbestos consumption … we agree with the urgent need to stop producing and using asbestos.” Unfortunately, it’s no secret that the United States is a leading asbestos consumer. In fact, recent data from the United States International Trade Commission (ITC) indicates that U.S. Industry has imported more than 114 metric tons of raw chrysotile asbestos in the first three months of 2022. A sum greater than the total annual asbestos imports from 2021. With clear correlation between asbestos consumption and mortality rates from asbestos-related diseases, it’s time for our nation to prioritize public health and human life over profit.