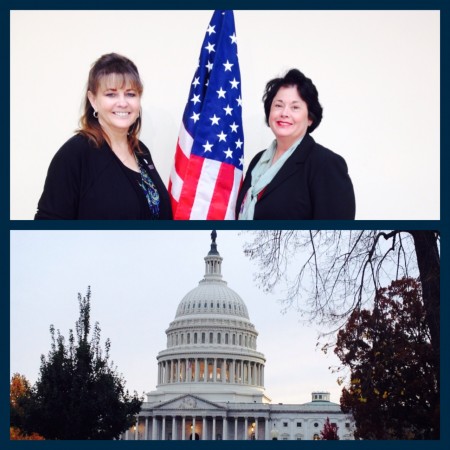 Sometime I feel like a broken record when I remind Congressional Members that “Asbestos Victims Oppose H.R. 982. The FACT Act was written for the #asbestos industry – NOT US!”

Ellen Patton, mesothelioma patient, and I joined Michelle Schwartz from Alliance for Justice, Julia Duncan of American Association for Justice, and Judy Van Ness, a mesothelioma widow for the Asbestos Cancer Victims’ Rights Campaign, at the House Staff briefing. It was exciting to have a room filled with staffers who were eager to learn how and why the asbestos victims oppose the FACT Act.

Ellen gave a powerful presentation about how mesothelioma has ruined her life and shared personal examples about how the FACT Act would negatively impact patients and families with higher hurdles and lost wages. Ellen is an inspiration to many mesothelioma patients around the world. Her situation is very unusual. Most people diagnosed with mesothelioma die within 6 to 12 months.

ADAO is urging everyone to help us stop H.R. 982—The Furthering Asbestos Claim Transparency (FACT) Act of 2013. The House will be having a vote on the FACT Act and we are encouraging everyone to learn about the Act and tell your elected representative not to support it!

How the FACT Act Hurts Asbestos Victims and their Families:

It’s not too late to let your elected representatives know you don’t agree with this injustice.

H.R. 982 does not protect Americans hurt by asbestos.  To this day, asbestos is still lethal and legal the United States and kills more than 10,000 Americans every year.  Corporations knew asbestos was deadly by the 1930s, but the asbestos industry hid the facts, and continued to expose workers and their families to its dangers, putting millions at risk for serious and deadly diseases.

Congress should focus on keeping Americans safe from deadly products, not protecting corporations that deliberately put workers and consumers in danger.