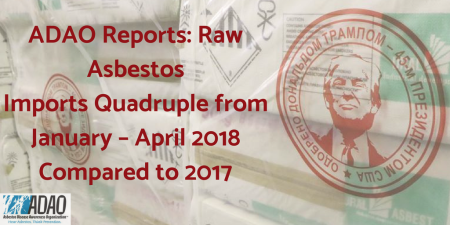 “Asbestos imports are on the rise, and our President has no plans to stop them,” stated Linda Reinstein, President and co-founder of ADAO. “According to the U.S. International Trade Commission (USITC), between January to April 2018, the chemical industry has spent $500,000 bringing in nearly 260 tons of asbestos from Russia and Brazil, which is four times greater than the January – April 2017 imports of 67 tons. President Trump and the Environmental Protection Agency (EPA), who have close ties to the chemical industry, have defended the deadly ongoing imports and use. Russia’s Uralasbest company, one of the largest asbestos producers, posted photos on its Facebook page of pallets chrysotile asbestos wrapped in plastic with Trump’s image at the center of a large red seal stating: APPROVED BY DONALD TRUMP, 45TH PRESIDENT OF THE UNITED STATES.”

“Vladimir Putin and Russia’s asbestos industry stands to prosper mightily as a result of the Trump Administration’s failure to ban asbestos in the U.S.,” said Environmental Working Group (EWG) President Ken Cook. “Helping Putin and Russian oligarchs amass fortunes by selling a product that kills thousands each year should never be the role of a U.S. president or the EPA, but this is the Trump Administration. Russia’s interests are Trump’s interests, and any clear-eyed American knows it.”

Asbestos is a known carcinogen and there is no safe or controlled use of asbestos. According to the new “Global Asbestos Disaster” paper, asbestos-related diseases account for nearly 40,000 American deaths each year. This year alone, asbestos has been found in children’s makeup, in schools in Pennsylvania, and in a prison hospital in Georgia.

“We urge President Donald Trump and President Vladimir Putin to recognize the dangers of asbestos and end mining and use of this deadly carcinogen,” stated Reinstein. “The time is now to put people before profits to end the deadly asbestos man-made disaster.”