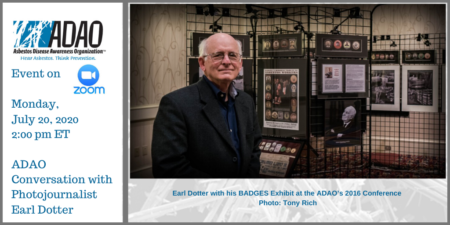 ADAO would like to invite you to join our fifth conversation on Monday, July 20 at 2:00 pm ET, this time with award-winning photojournalist Earl Dotter. Earl is the photographer and creator of the exhibit BADGES: A Memorial Tribute to Asbestos Workers.

For 50 years, Earl has been photographing some of the most hazardous and dangerous occupations in America, beginning with coal miners in the 1970s. His work was published in the 1998 exhibit and book, “THE QUIET SICKNESS: A Photographic Chronicle of Hazardous Work in America.” Since then, he has continued to document workers who put their lives at risk for their jobs. In 2000, Earl received an Alicia Patterson Foundation Fellowship to document commercial fishing, one of the nation’s most dangerous trades. After 9/11, he photographed the rescue recovery effort at Ground Zero, work that ultimately won him APHA’s Alice Hamilton Award. Before COVID-19, Dotter was touring his retrospective exhibit, LIFE’S WORK, A Fifty Year Photographic Chronicle of Working in the U.S.A. His recently published book of the same name is a companion to the touring exhibit. Earl has also been a Visiting Scholar at the Harvard School of Public Health since his appointment in 1999.

Earl began his BADGES: A Memorial Tribute to Asbestos Workers exhibit and posters in 2015 with the poster honoring the Legacy of Dr, Irving Selikoff, born 100 years ago in 1915

The 2016 BADGES poster commemorated the death of Alan Reinstein in 2006, a Veteran and Shipyard Worker who along with Linda Reinstein Co-Founded the ADAO

In 2017 the poster honored Senator Barbara Boxer who marshaled enactment of the Toxic Substances Control Act, signed into law by President Obama

In 2019 the BADGES poster focused on: “Progress & Challenges from the Frontlines” Highlighting organizations and individual who share their stories with Congress, Mike Mattmuller who died recently

The 2020: BADGES poster “Art, Advocacy, and Academia” presented visual examples of how ADAO members are graphically conveying the harm caused by Asbestos to the Public and Congress

During the call, we will discuss his life as a photographer, the dangers of asbestos exposure to workers, what the U.S. needs to do to protect those who work in hazardous jobs, and as always, we will follow the conversation with a Q&A for audience members to ask Earl any questions they may have.

Registration for the event is mandatory and will close on Sunday, July 19 at 5pm ET. GOOGLE RSVP FORM

We hope to see you there!