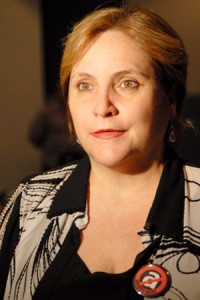 ADAO is extremely proud to announce there will be nine different countries represented at our Asbestos Awareness Conference. This list includes participants from Italy, Canada, Brazil, Australia, and the UK. The harmful effects of asbestos are not contained within one country, or one border; asbestos exposure is a global problem that must be solved internationally. ADAO embraces globalism, we focus on the bigger picture, and how asbestos affects every part of the world. By working together we can stop the spread of asbestos, but if we are not united, the problem cannot be solved. We must understand that the mining, exportation, and production of asbestos affects us globally, and ADAO will continue to reach out to other nations in order to bolster support for the fight against asbestos.

There will be many international speakers at the conference, including Brazilian Civil, Safety, and Health engineer, Fernanda Giannasi. During her time as a federal factory inspector in Brazil, Ms. Giannasi became a specialist in issues relating to asbestos, nuclear energy, and other carcinogens. Having been exiled to Osasco in 1995, Ms. Giannasi discovered many cases of asbestos-related disease amongst the local population. In collaboration with former workers from the Osasco asbestos-cement factories, she began an investigation into the causes of disease in the city. She was a founding member of ABREA, the Brazilian Association of the Exposed to Asbestos, which was set up in 1995 to act as the voice for Brazil’s asbestos victims. For her work on behalf of Brazil’s asbestos victims, she has received death threats and been sued by Brazilian asbestos stakeholders. She has been honored by various advocacy groups in Brazil, the US, Japan, and Canada.

Fernanda, ADAO is excited to welcome you back to our Asbestos Awareness Conference on Friday, March 30!