Bill Expedites the Ability for the EPA to Ban Asbestos 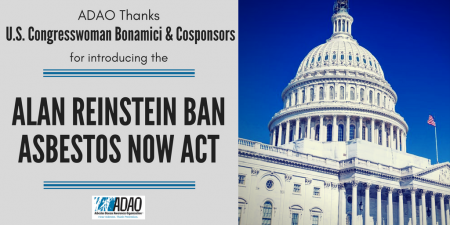 With this Act, the U.S. Environmental Protection Agency (EPA) would be able to make the manufacture, processing, use, commercial distribution, and disposal of asbestos illegal after 18 months of its passage. This is in stark contrast to the current review cycle that can take up to 7 years, as mandated by the Frank R. Lautenberg Chemical Safety for the 21st Century Act that passed in the summer of 2016.

Annually, an estimated 15,000 Americans die from preventable asbestos-related diseases, yet the imports and use continue. The timing of the bill is critical, noted ADAO’s President Linda Reinstein and widow to the bill’s namesake.

“ADAO is extremely thankful to Congresswoman Bonamici for the introduction of The Alan Reinstein Ban Asbestos Now Act of 2017,” said Reinstein. “The facts are irrefutable — asbestos kills. In 2016, the asbestos imports nearly doubled as the chemical industry shamefully continued to put profits over people. With the passage of ARBAN, we can work to end the asbestos man-made disaster.”

“We have known about the dangers of asbestos for decades, and many countries have banned it for good reason. It’s past time for Congress to take action and save lives,” said Congresswoman Suzanne Bonamici. “Congress and the EPA must immediately work together to protect the health of our communities from this known carcinogen. Families in Oregon and around the country have lost parents, children, and loved ones to asbestos-related diseases, and there is no reason more families should have to suffer. We must protect our communities and make sure that nobody else is exposed to this deadly toxin.”