Skip to content
Home/Blog/ADAO Gets Congressional Support In Fight Against Asbestos, Bolstering the Overwhelming Consensus

ADAO Gets Congressional Support In Fight Against Asbestos, Bolstering the Overwhelming Consensus 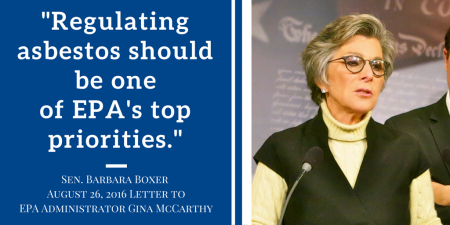 The Asbestos Disease Awareness Organization (ADAO) has been leading the charge for federal regulation of asbestos since the organization’s inception nearly 13 years ago. In that time, we’ve spent countless hours advocating for victims rights, educating law makers and policy shapers, and working to spread awareness on the realities of asbestos-caused diseases and the risk they pose to the American public.

Along the way, U.S. Senator Barbara Boxer has been, hands down, the most supportive Congressional champion ADAO could have hoped for in our fight against asbestos. We have collaborated with Boxer’s office for years on shaping public policy to address asbestos, and this summer, we shared a joint victory when The Lautenberg Act passed, reforming our country’s chemical safety laws and paving the way for the Environmental Protection Agency (EPA) to swiftly ban asbestos.

Last week, Sen. Boxer doubled down on her anti-asbestos stance. She sent a letter to EPA Administrator Gina McCarthy pressuring her to select asbestos as one of the top 10 chemicals for TSCA review and regulation, as the EPA tries to “identify positive early actions that demonstrate the Agency’s commitment to bold and effective implementation.”

Using ADAO’s research, Boxer reminded Administrator McCarthy of the 15,000 Americans who die preventable deaths every year due to asbestos-caused diseases.

In her letter, Boxer reiterated “During the development of TSCA reform legislation, numerous members of Congress cited asbestos as an example of why the law must be revamped and emphasized that the new TSCA legislation would remove the roadblocks that stymied EPA’s first attempt to regulate asbestos.”

Boxer makes it clear that there is consensus among Congress when it comes to asbestos, and it doesn’t end there. Every major independent medical organization has spoken out against asbestos. Boxer’s letter references this by mentioning the anti-asbestos stances from the World Health Organization (WHO), Occupational Safety and Health Administration (OSHA), and even the EPA itself.

Boxer’s letter in support of our position comes just in time to give ADAO momentum as we head to Washington for our 10th Congressional Staff Briefing in September. The panel of six experts joining me for the briefing further illustrates the growing, unquestionable consensus against continued asbestos use: representatives from the National Resources Defense Council (NRDC), the American Public Health Association (APHA), the Environmental Information Association (EIA), and Safer Chemicals Healthy Families (SCHF) will all be standing alongside me urging Senate staffers to push for prioritized asbestos regulation.

There couldn’t be a better time for ADAO to receive such an influential vote of support, and—as always—ADAO owes a huge debt of gratitude to Sen. Boxer for continuing to stand in solid support of ADAO and asbestos victims.

We’ve never been closer to an asbestos ban than we are now. Together—along with our Congressional champions and other allies—we are making change happen!