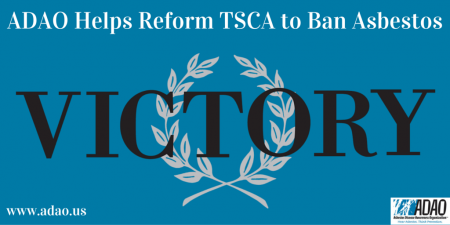 It has been twenty-five years since the Environmental Protection Agency’s (EPA) ban on asbestos was overturned. In that time, an estimated 375,000 Americans lost their lives to preventable asbestos disease and countless more were exposed to this deadly toxin. For a quarter of a century our community fought to right this wrong and empower the EPA to protect Americans from asbestos. Today, after countless hours of negotiations and numerous Congressional hearings in which ADAO presented the deadly and devastating impact asbestos has on American families, our voices and our stories were heard and the U.S. House passed legislation that ensures the EPA can finally ban asbestos.

The Frank R. Lautenberg Chemical Safety for the 21st Century Act is a landmark step forward, but let’s be clear, the legislation that is going to the U.S. Senate and then the President’s desk is not perfect. Asbestos is a known human carcinogen for which there is no safe level of exposure, yet under this compromise bill, the EPA may take as long as seven years to assess, regulate, and ban asbestos in America. To the chemical industry, this unnecessary delay is about maximizing dollars and cents, but as the ADAO community knows all too well, the true cost of delay will be measured in lives.

There is still more work to be done to ensure the EPA acts as quickly as possible, but for the first time in decades, the path to victory is clear. Let’s take a minute to see just how far we have come.

In 1976, the Toxic Substances Control Act (TSCA) was sold to the public as a promise that the federal government would keep American communities safe from dangerous chemicals. In 1989, after ten years of study, 100,000 pages of supportive documentation, and $10 million spent, the EPA banned most uses of asbestos by issuing a final rule under Section 6 of 1976 TSCA. In a landmark case, “Corrosion Proof Fittings v. EPA” the asbestos manufacturers sued EPA’s arguing that their rule making procedure was flawed, that there was no substantial evidence of risk from asbestos exposure, and that the EPA did not use the least burdensome regulation as required by TSCA in order to achieve its goals of minimum reasonable risk. 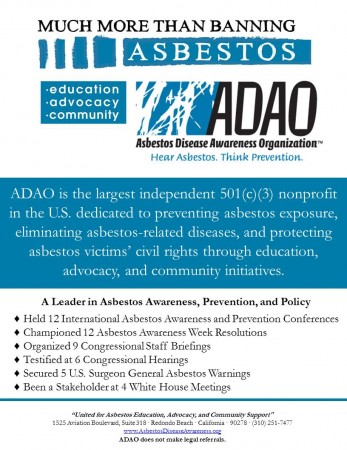 In 1991, as a result of this legal action, initiated by the asbestos manufactures, this rule was overturned by the Fifth Circuit Court of Appeals.  As a result, asbestos remains legal and lethal, allowing “the manufacture, importation, processing, or distribution in commerce for the majority of the asbestos-containing products.” Jim Jones, assistant administrator of the Office of Chemical Safety and Pollution Prevention of the EPA put it as clearly and bleakly as possible: “More than three and a half decades since the passage of TSCA, the EPA has only been able to require testing on just a little more than 200 of the 84,000 chemicals listed on the TSCA inventory and has regulated or banned only five of these chemicals.”

After the asbestos ban was overturned, it fell on the asbestos victim community as well as health and safety advocates to fight to ensure the EPA was given the power to protect Americans from toxic chemicals. Since 2004, ADAO has served as a global leader in asbestos awareness, prevention, and policy. ADAO staff and volunteers organized nine Congressional staff briefings, brought victims to testify at six Congressional hearings, and served as stakeholders during four White House meetings. In addition, we educated the public through international awareness and prevention conferences and by championing Asbestos Awareness Week resolutions.

The latest effort to reform TSCA began in the U.S. Senate in 2013. Throughout the debate, many people talked about how asbestos still kills 15,000 Americans every year, but it took the asbestos victim community to convey the reality of the harm asbestos causes American families and to ensure this bill will expeditiously address asbestos. For three years, ADAO ensured not only that asbestos victims’ stories were told, but also that our concerns were heard loud and clear at the highest level.

Asbestos was the poster child for TSCA reform and it will also be the litmus test for the efficacy of this bill.

Key hurdles causing the EPA’s previous asbestos ban to fail have been eliminated in this new legislation. The bill allows the EPA to test and review approximately 10 of the thousands of chemicals in our homes, communities, environment, and consumer commodities per year. Asbestos will be one of the very first chemicals evaluated by the EPA under the new TSCA legislation. A Senate resolution passed in 2014 set the requirement that chemicals which are “persistent, bioaccumulative, and toxic” must receive expedited action. Because of the devastating effect of asbestos on human health, and thanks to the tireless work put in by ADAO volunteers and Congressional allies, asbestos will get top billing within this prioritized category. Additionally under the TSCA reform bill, the regulation of asbestos will not be stipulated by market or financial concerns. Per the legislative text, substances that “present an unreasonable risk of injury to health or the environment,” must be regulated “without consideration of costs or other non-risk factors.”

These victories were by no means easy feats as the chemical industry fought meaningful reform every step of the way. ADAO is deeply indebted to Senator Barbara Boxer (D-CA) for diligently fighting for asbestos victims and for the health and safety of the American public. Without Sen. Boxer, we would surely face legislation that placed the chemical industry’s profits over people. Sen. Boxer, who has supported ADAO since its inception, called asbestos “one of the most harmful substances known to humankind” and stated it “should have been banned already.” She agrees that this TSCA reform does not go far enough, but says it does represent an improvement.

“This bill was the most difficult bill I have ever worked on,” Boxer said. “Finally, we have a product that is better than current law and worthy of Frank Lautenberg’s name.”

The White House has offered strong support for the bill, stating: “If the Federal government is to restore public confidence in the safety of chemicals, which are used in commerce and are an integral part of the Nation’s economy, it is essential that the Congress provide EPA with the necessary tools and authorities to effectively assess chemicals and regulate risks.” We agree, but we also want our elected officials and federal regulators to do more.

Congress must stay vigilant to pursue options for further expediting a full ban on asbestos in a much shorter time frame than the one delineated in the TSCA reform legislation. Until the import and use of asbestos is prohibited entirely, the unnecessary deaths connected with exposure will continue to plague the American public. As we recently outlined in a special series on TSCA reform published by The Bureau of National Affairs (BNA), the human cost for failed efforts to regulate toxic chemicals is unjustifiable.

ADAO is endlessly grateful to the bipartisan, bicameral legislators and the advocates who have spent countless hours negotiating and working toward this moment of historic progress. We look forward to continuing this this fight for public health and safety along with our allies in Congress.