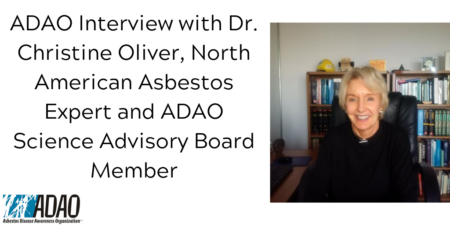 This week I had the pleasure of interviewing Dr. Christine Oliver, a member of ADAO’s Science and Advisory Board. In this interview, Dr. Oliver shares her personal experiences of working with the mesothelioma community and opinions on asbestos policies both in Canada and the United States. She also sheds light on a wonderful art, advocacy, and academia screening of the documentary, Dirty Laundry, at the Dalla Lana School of Public Health at the University of Toronto in November. It addition to the screening, there will be a panel discussion among five public health policy and advocacy experts who will be joined by filmmakers Conor Lewis and Zack Johnson as participants. ~ Linda

Linda: Please tell me about your background and your work.

Dr. Oliver: I grew up in the Southern U.S., in North Carolina, the daughter of a doctor and a nurse. Tobacco was the big industry in North Carolina at that time; although there were four asbestos textile plants in the Charlotte-Davidson area of the state. With some trepidation as a woman seeking a career in the late 1960’s, I applied to medical school.  I first heard of asbestos and related diseases in medical school. After an internship and residency in internal medicine, I was working as a primary-care physician in a neighborhood family care center affiliated with the Massachusetts General Hospital (MGH) in the Boston area when I encountered asbestos again in the real-life practice of medicine. That experience was part of what prompted me to do a second residency in occupational medicine and pursue a career in occupational and environmental medicine, with a primary goal of prevention of exposure-related illness and disease. To that end, I did research, taught at Harvard Medical School, and cared for patients at the MGH. At the request of asbestos victims and their families and attorneys, I have testified on their behalf in courts of law.

I am now living in Toronto, ON and working with Occupational Health Clinics for Ontario Workers (OHCOW). Supported by the Canadian Ministry of Labour, OHCOW provides medical, educational, and legal services directed at work-related illness and disease. I am an Adjunct Professor in the Division of Occupational and Environmental Health at the University of Toronto’s Dalla Lana School of Public Health (DLSPH).

Working with you and ADAO has been eye-opening and a pleasure. It is an honor to serve on ADAO’s Science Advisory Board, along with my respected colleagues.

Linda: What inspired you to organize a screening of “Dirty Laundry,” an asbestos documentary, at the Dalla Lana School of Public Health at the University of Toronto?

Dr. Oliver: I was inspired by the showing of a trailer of Dirty Laundry at ADAO’s annual meeting in Washington, DC in April, 2019, by both the passion and dedication of the filmmakers and by the context in which it was shown. That context is the relentless effort by you, ADAO, and other organizations and health professionals to convince the U.S. Congress to pass the Alan Reinstein Ban Asbestos Now Act to ban the importation, manufacture, use and distribution of asbestos and asbestos-containing products in the United States, without exception. The context is, in addition, the fact of the ban on asbestos in Canada effective December 30, 2018, with important exclusions.

The exclusions leave Canadians vulnerable to unsuspected asbestos exposure and related disease – most importantly malignant mesothelioma. Residential, occupational, para-occupational (e.g., family members of asbestos workers), and incidental asbestos exposures put communities at risk for this dread and usually fatal disease. My fear is that the ban in Canada will create a false sense of security. Education of students, educators, and the general public with regard to remaining risk from asbestos exposure is necessary to protect the public health.

Linda: Could you give us a little more detail about the panel of experts joining us after the screening?

Paul Demers is Director of the Occupational Cancer Research Centre in Ontario, a professor at the DLSPH, and a current or past member of many national and international panels dealing with occupational and environmental cancer, including IARC.

Ray Copes is a professor at the University of Toronto and Chief of Environmental and Occupational Health at Public Health Ontario. He was the founding Scientific Director of the National Collaborating Centre for Environmental Health in British Columbia. Since 1990, his work has focused on research, teaching, and practice in environmental health.

Robert Dematteo is an Occupational Health and Safety Specialist who co-authored an advisory committee report on work processes at the General Electric production facility in Peterborough, ON, a detailed retrospective workplace exposure assessment from 1945 to 2000. He documented asbestos-related disease among former workers at the plant and their families. He works with OHCOW and has conducted industrial hygiene assessments of asbestos in a number of public buildings in Ontario, including schools.

Andrea Sass-Korstak will moderate the panel. Andrea is an Occupational Hygienist and former Associate Dean at the DLSPH. She sat on the Asbestos Review Panel for the University of Toronto.

Linda: What do you hope to accomplish from the screening at the University?

Dr. Oliver: What I hope to accomplish is to raise public awareness with regard to the exclusions in the recently-implemented regulations prohibiting the importation, manufacture, sale, and use of asbestos and asbestos-containing products in Canada, and to what these exclusions could mean for their health.  University-sponsorship of the screening and related panel discussion of a film that touches all the bases with regard to unsuspected asbestos exposure and the possible consequences, most importantly malignant mesothelioma, makes the content immediately accessible to young people, students, and teachers who are in a position to influence not only current but also future behavior with regard to the regulation of asbestos and asbestos-containing products. Legislative work remains to be done, particularly with regard to the occupational exposure limit for asbestos in the Province of Quebec, which is 10 times higher than those for most (but not all) of the remaining Canadian provinces (1 f/cc vs. 0.1 f/cc).  The major producers of asbestos in Canada were two mines in Quebec.

Linda: What is your message to Congress?

Dr. Oliver: My message to Congress is Do the Right Thing. It is as simple as that. To be held hostage to the chlor-alkali industry is unacceptable and immoral. To sacrifice the public health to the continued use or distribution of asbestos and asbestos-containing products of any kind is also unacceptable and reflective of greed and moral cowardice on the part of our legislators. Il quanto basta! As the Italians would say.

Cheers to Dr. Christine Oliver for raising asbestos and mesothelioma awareness in North America and around the world. You can watch a trailer for Dirty Laundry, a movie that highlights the cost of human suffering created due to asbestos exposure, here.