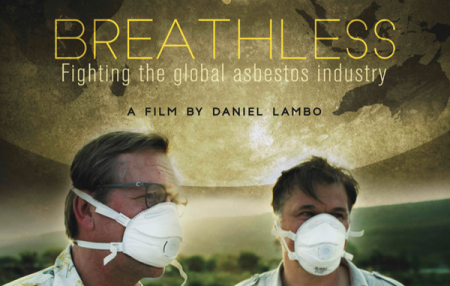 This week I had the pleasure of interviewing Eric Jonckheere and Krishnendu Mukherjee (aka Tublu) who are the masterminds behind the moving documentary Breathless. In the interview, Eric and Tublu talked about their experience during the creation of this documentary, and the global importance of the film. They also discuss ways you can help, and give the audience a raw display of the dangers of asbestos and the need for a global ban. “Breathless” will be screened at the Institute of Contemporary Arts in London on Saturday 27th at 4:00 PM.

Linda: Introduce yourself to our readers.

Eric: I am Eric Jonckheere, a Belgian victim of asbestos and president of Asbestos Belgium Victims Association (Belgium) My profession as an airline pilot and having suffered the loss of 4 close family members have made me an anti-asbestos world activist.

Tublu: My name is Krishnendu Mukherjee (aka Tublu). I am a barrister and Indian advocate based at Doughty Street Chambers in London, which is one of the largest collection of civil liberties and human rights lawyers in the world. I originally specialised in immigration law, but since 2010 I have been working on issues of occupational health, including asbestos-related diseases in India, filing compensation and remediation claims in India and abroad.

Linda: Tell our readers about the documentary Breathless

Eric: After the first ever asbestos court case won by Francoise Jonckheere, a housewife in Belgium, filmmaker Daniel Lambo, who’s father had worked at multinational Eternit. He started following our court case and soon found out Eternit had factories in countless countries.

Tublu: Breathless is a film about the export of the asbestos industry to the developing world, focussing on a Belgium company ETEX/Eternit, which operated factories in Belgium and in India. The film shows how the same company knowingly harmed a Belgian community in the 1970’s and then did exactly the same in India in 1990’s. There can be no excuse, no justification for doing that. For me, it is simply criminal to harm people in this way, especially when the company knew that the local people depended on the company for their livelihood. In the film Eric says: “We trusted Eternit, but they lied”.

Linda: Why is Breathless important to India and the world?

Eric: Tobacco, asbestos, or chemical multinationals have invested heavily in third world countries to avoid rules getting stricter in Europe and North America, where workers are less protected and deals can be made with local politicians. Once they leave, multinationals leave behind misery, sickness and pollution.

Tublu: People don’t know that the asbestos industry continues, despite being banned in 60 countries in the world. People in the west think its history, and people in countries like India, don’t know the dangers. So the first important aspect of the film is that it tells people of this fact. It also illustrates another important issue, the issue of corporate governance and accountability. Corporations which operate is poor legal systems, can bankrupt themselves, sell factories and withdraw from the countries to avoid liability, frequently leaving the affected people without a remedy. Corporations must behave like ordinary citizens ensuring that they remedy and compensate for their mistakes.

Linda: Share the details about the upcoming screening in London.

Tublu: The Institute of Contemporary Arts have kindly agreed to host a joint Human Rights Watch and Doughty Street Chambers screening on the 27th October 2018 at 16.15, followed by a Q&A with Baskut Tuncak, who is the UN Special Rapporteur for Toxics. I am excited about it and another screening on the 26th November at the UN Forum on Business and Human Rights in Geneva.

Linda: What can our readers to do help?

Eric: Legal action must be taken to make Eternit pay for the cleanup of the mess they left behind and pay to compensate for the medical costs. Initiating a court case against multinational Eternit in Brussels will be costly. As the Indian victims struggle to make ends meet, they do not have the means to seek Justice. Through a worldwide crowdfunding action, we hope to help these amazing resilient people.

Tublu: We want to have simultaneous actions and campaigns in Belgium and India for the victims of asbestos. The case in India will be primarily focussed on remediating the asbestos waste dump in Kymore (near Bhopal) which is the subject of the film. As the victims are not corporations this can only be funded by a crowdfunding campaign which we hope people will understand that need for and contribute to.

Harminder Bains, a partner at Leigh Day, whose father died of the asbestos-related cancer Mesothelioma, shared, “This documentary comes at a crucial time and will assist in highlighting to the world the asbestos industry’s continued threat to life by exposing men, women and children to asbestos.  The film shows children playing in the asbestos dump.”

The press are invited to attend and press passes can be obtained by contacting Harminder Bains on 0207 650 1166 or hbains@leighday.co.uk.

I am excited to be in attendance of the London screening of “Breathless” on October 27th. I encourage all those in and around London to join me for the showing of this moving documentary.

BREATHLESS – Trailer from Storyhouse on Vimeo.