Skip to content
Home/Blog, Press Release/ADAO Issues Statement in Opposition of the EPA’s Decision to Dangerously Narrow the Scope of Asbestos Risk Evaluation

Take action and join the nearly 15,000 others by signing our petition to the EPA to Ban Asbestos Without any Loopholes or Exemptions

President and CEO, Linda Reinstein, Details Why the “SNUR” is Not Enough and the Need for an Asbestos Ban Remains

WASHINGTON, DC – August 10, 2018 – The Asbestos Disease Awareness Organization (ADAO), the largest independent nonprofit asbestos victims’ advocacy group in the United States; today issued a statement from President and CEO Linda Reinstein about the need for the EPA and Administration to fully acknowledge the public risks associated with asbestos, and the continued need for a permanent ban of the lethal mineral.

“The proposed Significant New Use Rule (SNUR) which EPA touts as a meaningful action on asbestos is a poor substitute for a full risk evaluation and a permanent ban. A SNUR is not an asbestos ban and will not protect Americans. 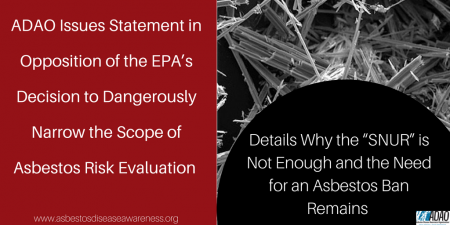 “In particular, it is outrageous that the EPA has dangerously narrowed the scope of its asbestos risk evaluation to exclude the ongoing use and disposal of legacy products and the Libby Amphibole, and removed any consideration of the risks that these products would present if they were reintroduced in commerce. This means the EPA will be unable to use the risk evaluation to support a permanent ban of all current and former products and will have no ability to address the serious ongoing risks that installed legacy products pose to the public.

“Americans are losing confidence in the EPA’s ability to implement the Toxic Substances Control Act (TSCA) according to the law. It is abundantly clear under Trump’s administration that they have their eyes shut tight as seen in the recent EPA FAQs about the SNUR.  The EPA is conveniently ignoring the laws and regulations that allow it to take action to permanently ban all current and former users and to provide protection from the ongoing risks of installed legacy products.  In fact, the EPA stated, ‘EPA cannot simply ban imports, regardless of their source, for current uses unless its ongoing evaluation under the Toxic Substances Control Act (TSCA) identifies unreasonable risk associated with such importation.’  However, EPA has ample means to conclude now, in its ongoing risk evaluation, that these uses are unsafe and need to be banned. EPA can also use the risk evaluation to address and then ban the discontinued uses subject to the SNUR.

“EPA says that the SNUR, when final, ‘would prevent imports, including from Russia and anywhere else, for the uses in the rule.’ This is simply not true. The SNUR would only require importers to notify EPA and, in itself, would ban nothing. EPA could review the use associated with the imports and decide that it should not be restricted.

“Absent from the EPA’s list of ‘Potential Market Uses Prevented by the SNUR’ are consumer products like crayons, tweens makeup, renewed asbestos mining in the US and more new uses that may be occurring.

“Each year, nearly 40,000 American die from asbestos-caused diseases, while Chlor-Alkali industry imports and uses of hundreds of tons of raw asbestos continue. It is deadly and ludicrous that the EPA is narrowing the scope of the risk evaluation that will most likely lead to exemptions for the big users and ignore the legacy products that the public is exposed to every day. Americans can’t identify asbestos in their homes, schools, workplaces or the environment, nor can we manage the risk. It is time for the EPA to do their job and ban asbestos without any loopholes or exemptions.”