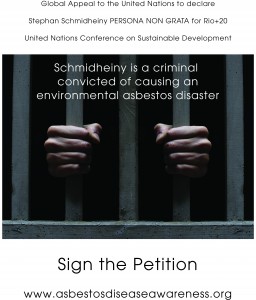 Stephan Schmidheiny, former asbestos owner-executive recently convicted of “causing a continuing disaster in health and environment” and “willfully neglecting safety regulations in the workplace,” has plans to speak at the United Nations Conference on Sustainable Development in Rio de Janeiro, otherwise known as Rio+20. He has been sentenced to 16 years in prison and ordered to pay millions of Euros in damages as compensation for the 2,000+ lives he and his Eternit asbestos-cement company took as a result of their negligence and pollution. As a convicted criminal, the United Nations should not allow him to address the conference on Sustainable Development.

Appearances can be deceiving.  As the Founder and Honorary Chairman of the World Business Council for Sustainable Development,” Schmidheiny promotes himself as a “philanthropist” that supports key issues such as “human dignity, sustainable development, liberty, democracy, equity, education, leadership, association, social responsibility, and eco-efficiency.”

This is the same Stephan Schmidheiny that was found guilty on February 13, 2012 in Turin, Italy and sentenced to 16 years in prison for “willful and permanent environmental disaster” and “willful negligence in implementing health and safety regulations” that would have protected his workers and the community from the well-known dangers of asbestos exposure.

The World Health Organization states that 107,000 workers die each year from asbestos-related diseases, and the men who profit from this business of death must face the consequences for their actions. Schmidheiny is not a philanthropist, he is a murderer.

Convicted criminal Stephan Schmidheiny should not be welcome at a UN conference. Join the global campaign and let’s make him famous for the Eternit asbestos executive he really is. Please sign the petition and share it through the social media outlets (facebook, twitter, google +). You can even sign the petition with your facebook. Please help us spread the message. Together, change is possible.