On June 16, 2020 the U.S. Senate Committee on Commerce, Science, and Transportation will hold a nomination hearing to consider five presidential nominations for federal agencies. Nancy Beck, the Assistant Administrator, Office of Chemical Safety and Pollution Prevention at the Environmental Protection Agency (EPA),  is currently being considered to be a Commissioner and Chairman of the Consumer Product Safety Commission (CPSC). 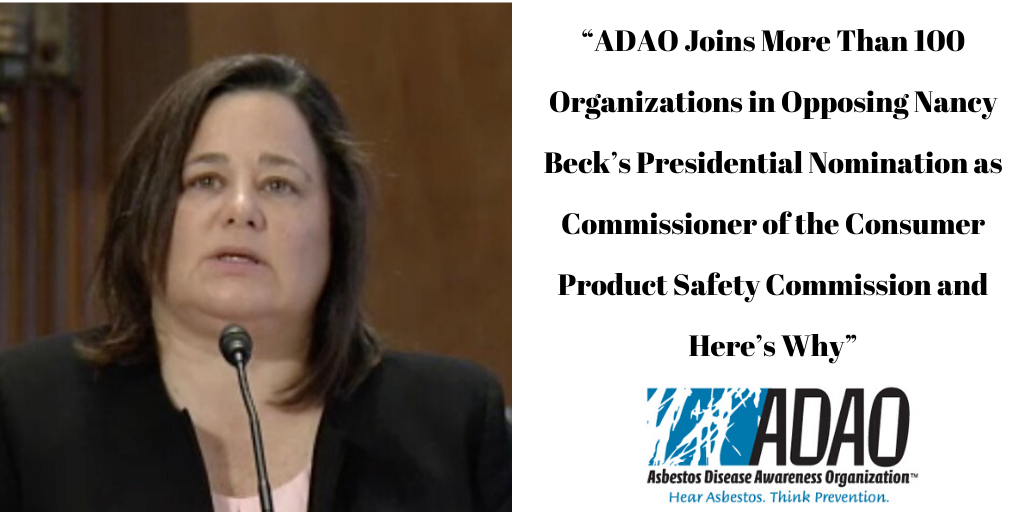 Prior to joining EPA, Beck was the Senior Director of Regulatory & Technical Affairs at the American Chemistry Council (ACC), a powerful chemical industry lobbying group. ACC is a major advocate for keeping asbestos imports and use legal in the U.S.

Based on Beck’s biases towards industries that still import and use asbestos, a known carcinogen, ADAO joins with more than 100 other organizations in opposing her presidential nomination. As the highest ranking political appointee in the TSCA  program, Beck was responsible for overseeing EPA’s controversial risk evaluation on asbestos. Under her direction, the scope of the evaluation was  narrowed to exclude legacy asbestos, all fiber types but chrysotile, children’s products contaminated with asbestos and cancers and lung diseases caused by asbestos. These exclusions were strongly criticized by EPA’s science advisors as fundamental weaknesses in protecting public health.  Beck was also in charge of the TSCA program when it proposed an ill-conceived Significant New Use Rule (SNUR) that opened the door to resuming use of unsafe asbestos programs that have been discontinued.  Throughout her career, Beck has opposed and weakened standards that impact our health, safety, and environment; particularly with respect to asbestos. If confirmed to lead the CPSC, ADAO feels that she will weaken protections even further, ultimately damaging public health and consumer protection for years to come.

The CPSC is responsible for protecting consumers from hazards posed by consumer products. The agency has the responsibility to ensure that more than 15,000 products are safe, including toys, household products, furniture, cribs, and more.

Asbestos kills nearly 40,000 Americans every year, and based on Beck’s track record, ADAO fears that toxins such as asbestos will continue to find their way into consumer products.

It’s like the fox guarding the henhouse. Beck should not be in charge of anything to do with our environment or public health. Her background makes it evident that she will not properly regulate toxic chemicals such as asbestos, and will cause more harm to our country.