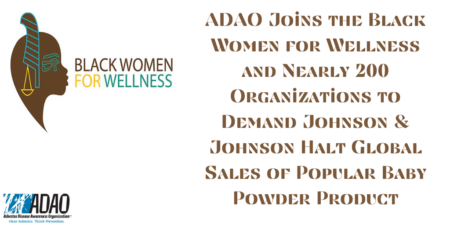 The Asbestos Disease Awareness Organization (ADAO), alongside nearly 200 organizations from 51 different countries, signed onto the letter to Johnson & Johnson CEO Alex Gorsky urging the company to stop all sales of their asbestos-contaminated talc based baby powder.

Although J&J announced in May that they will stop the sales of their toxic baby powder in the U.S. and Canada, they will not be pulling said products off the shelves, and instead leaving them until they sell out, putting consumers in direct danger of asbestos exposure. Even more alarmingly, the company has stated they plan to continue sales of the product internationally. Asbestos, a known carcinogen,  causes cancers including mesothelioma, lung cancer, ovarian cancer, and asbestosis, among many others.  Each year, over  200,000 people worldwide die from preventable asbestos-caused diseases. While nearly 70 countries have banned asbestos, shockingly, asbestos remains legal and lethal in the US.

Although we are thrilled that the North American sales have been halted, these decisions show the corrupt nature of Johnson & Johnson, as they acknowledge the lethal harms of their products, yet plan to continue sales in the rest of the world.

Putting money over public health is not a new ideology for the company, however. Documents produced during J&J litigation revealed the corporation has been aware since the late 1950s that the talc used in Johnson’s Baby Powder sometimes contained asbestos.

Janette Robinson Flint, Executive Director of Black Women for Wellness explains, “Black Women for Wellness has known too many Black women suffering from reproductive and breast cancers; we are direct witnesses to the suffering, expense and harm caused to families by cancer. Marketing to African American and Latinx women with the continued sales of those same products containing toxic chemicals in international markets with majority Black & Brown women contradicts what they have said and calls into question the sincerity of their statements.”

Monica Unseld, Ph. D, MPH, founder of Data for Justice, shared, “Now is the time for Johnson & Johnson to demonstrate its commitment to health equity beyond public statements. This means stopping the  targeting Black and Brown communities with toxic products.”

Mr. Gorsky, as a mesothelioma widow, I hope you read and respond to our letter which urges “your company to halt sales of its talc-based Johnson’s Baby Powder worldwide, and to voluntarily recall and safely dispose of its existing inventory in North America.”