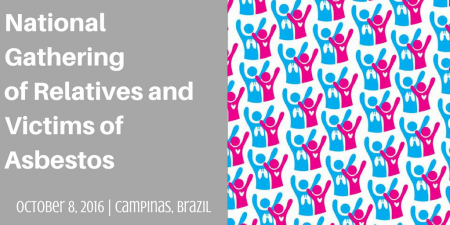 As you may have seen in an earlier blog, I will be traveling to Brazil in October on an invitation to speak at the country’s International Seminar on Asbestos.

In continuation of the educational aim of this trip, I will be speaking on behalf of ADAO at Brazil’s International Gathering of Victims and activists on October 8.

This meeting, which brings together several countries, aims to introduce and empower the activists working in “the fight to eradicate asbestos, considered the ‘health catastrophe of the twentieth century,” according to the event program.  Further, organizers hope the meeting will lead to “the construction of a joint action plan,” and “strengthening of solidarity to end the abysmal social invisibility of asbestos patients in Brazil.”

The “Representatives of International Delegations: The Anti-Asbestos Fight in Other Countries” panel will include Dr. Barry Castleman (USA), Agata Mazzeo and Assunta Prato Italy, and Carmen Lima (Portugal).  I’ve been asked to focus on social media advocacy and strategic storytelling ADAO uses to raise awareness, shape policy, and build community.

As stated in the program, the Brazilian community touched by asbestos “are victims of a misguided and unjust development option that prioritized the concentration of wealth and profit at the expense of social and environmental well-being of the population.”

I look forward joining the experts, advocates, and activists to strengthen collaborate efforts to end the asbestos man-made disaster.