“Last night we lost another Meso Warrior when Janelle Bedel died, her husband lost his wife, her son lost his mother, her extended family lost a beloved member, her community lost a friend, the world lost another hero. Today, tomorrow, the next and the next day this will be repeated at least another 7 times in the United States as a result of mesothelioma and each hour of every day into the future, in the United States, other asbestos-related cancer death will occur. These deaths could have been prevented if only our legislators had taken action to ban asbestos in the United States instead of turning a deaf ear toward the victims while opening up their pockets to the moneyed interests of the pro-asbestos lobby. Each death changes a family forever, each tear we shed represents not just those that die today but also those from the past and those who will die in the future. Janelle we will continue your battle with vigor and determination. Love to your family.” Dr. Richard A. Lemen, Former Assistant Surgeon General, United States (ret). and ADAO Science Advisory Co-Chair 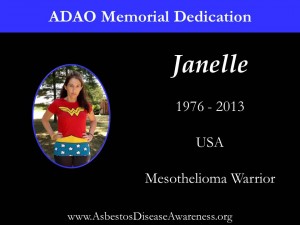 Janelle’s courage and perseverance throughout her illness earned her the nickname “Wonder Woman.”  With Andrew and Carson by her side, Janelle has been an inspiration to our mesothelioma community and supported fellow Meso Warriors around the world.  In spite of her debilitating illness, Janelle organized a Miles for Meso fundraiser run/walk last year in her town of Rushville, Indiana. She was an active supporter of ADAO and had planned to participate in the 2013 conference until she became too ill to attend.

Janelle was an inspiration to many, and her story was featured in the Rushville Republican and many times on the ADAO website as she shared stories, blogs, and videos, including “Janelle’s Mesothelioma Journey.”  Janelle produced her own videos to spread awareness about the harsh realities of her disease. In response to a comment, Janelle wrote, “I hope this video will show people we’re not statistics, we’re real people.”

Janelle’s spirit shined through in her Share Your Story posting – “I Will Never Be the Same Again” : “I have come a long way, but I know I will never be the same again. … Some days, I could deal with the new me and other days, it was harder. I just try to continue to improve my life every day. … There have been a lot of hard days, but the ones in between are really great!”

Just recently, I had the great honor of travelling to Janelle’s hometown of Rushville, Indiana to present Janelle with the 2014 Alan Reinstein Memorial Award before she passed away. The award, named for my late husband and the first President of ADAO, recognizes her commitment to education, advocacy and support to countless patients and families around the world. During my trip to Rushville, U.S. Senator Donnelly (IN), Rushville Mayor Mike Pavey and the rest of the City Council, staff from Congressman Luke Messer’s office, and the Rushville Republican each personally thanked and recognized Janelle for her incredible advocacy work.

As we grieve, we continue our fight for a global asbestos ban in Janelle’s memory.  Please take time to share your message about what you admired most about Janelle and how she impacted your life. Please post the messages on my Facebook page or email me at linda@adao.us.  Our community messages will be compiled into a book for her family.

Our Wonder Woman will forever live in our hearts and work.  Janelle, we love and miss you.