Skip to content
Home/Blog/ADAO Presents Experiences and Insights in the Presentation “Asbestos: Drafting Legislation During Tumultuous Times” Given at the American University Washington College of Law

ADAO Presents Experiences and Insights in the Presentation “Asbestos: Drafting Legislation During Tumultuous Times” Given at the American University Washington College of Law 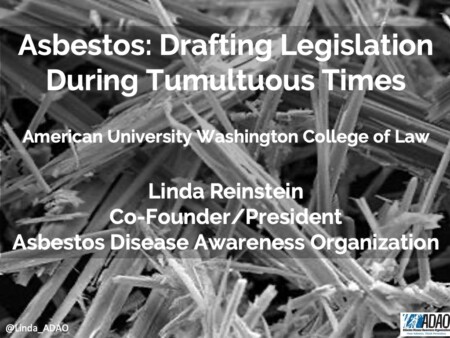 ADAO Presents Experiences and Insights in the Presentation “Asbestos: Drafting Legislation During Tumultuous Times” Given at the American University Washington College of Law

I was incredibly honored to give a virtual lecture at American University Washington College of Law once again this week. As Professor Bettina Poirier’s class guest speaker, I focused on strategy and tactics from a nonprofit organization’s perspective. Professor Poirier previously served as Staff Director and Chief Counsel to the Senate Environment and Public Works Committee for Senator Barbara Boxer.

Using experiences and lessons learned from ADAO’s past sixteen years, I shared insights and facts in my presentation “Asbestos: Drafting Legislation During Tumultuous Times.” Shaping public policy moves slowly, but our prevention and policy efforts have led to the bicameral Alan Reinstein Ban Asbestos Now Act (ARBAN). As Sun Tzu wrote in The Art of War, “Strategy without tactics is the slowest route to victory. Tactics without strategy is the noise before defeat.”

I wanted the students to understand that drafting legislation is a marathon, not a sprint. Similar to a war, there are many battles along the way. I have been working on passing a ban bill for 16 years, since my late husband was diagnosed with mesothelioma. From 1900-2017, the United States asbestos consumption reached 31 million metric tons. This puts us all in danger of legacy asbestos — asbestos found in buildings built before 1970. It also puts firefighters in grave danger. According to the NIOSH in a 2013 firefighter study had a rate of mesothelioma two times greater than the rate in the U.S. population as a whole.

What we know now is that the only way to prevent asbestos-related illnesses is to take away the possibility of asbestos exposure. However, though we’ve known that asbestos causes mesothelioma and other cancers since the 1960s, we have not been able to ban the carcinogen. In 1989, the Environmental Protection Agency (EPA) attempted to ban asbestos, but the ban was overturned in court just two years later. During 1999-2015, the annual number of malignant mesothelioma deaths increased by 4.8% overall. Since 1989, over one million people have died from asbestos-caused disease. In 2016, President Obama amended the Toxic Substances Control Act (TSCA) to overhaul and strengthen its key provisions, including asbestos reform. However, the amended TSCA has not been as powerful as we hoped. That is why we still need to pass ARBAN.

Grassroots efforts have been extremely important to the success of ARBAN. We found that using personal stories to spread our message was incredibly influential, and are grateful for those who have bravely shared their stories in front of Congress. In order to draft legislation, we had to do a historical legislative review, pin down our mission and vision, garner bipartisan support, and make sure the bill appealed to a diverse and broad audience. From 2001-2019, ADAO passed 15 resolutions, had 15 Congressional staff briefings, and attempted to pass 13 ban asbestos bills (five of those were variations of ARBAN). The current ARBAN bill has been our most successful, and has been the most comprehensive asbestos ban bill in 30 years.

Educational outreach opportunities like this one with AU are central to ADAO’s mission, and I greatly appreciate the opportunity to work with such bright students. While we are always focused on enacting legislation for a no-loopholes, no-exemptions asbestos ban, we also seek to empower people from all walks of life with the information they need to keep themselves safe from asbestos exposure. It is our hope that by connecting with students at one of the most respected law school programs in the country, our message can be spread far and wide.

Together, time has proven that we can make change happen.