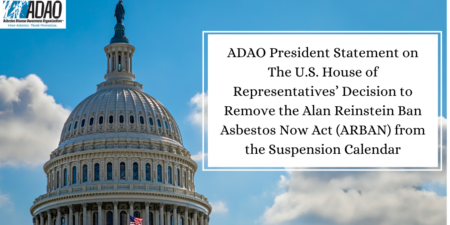 “I am disappointed that the Alan Reinstein Ban Asbestos Now Act (ARBAN) was scheduled on the suspension calendar for September 29 and then removed due to a technical correction. While we understand and respect the legislative process, hundreds of thousands of families who have been affected by asbestos-related illnesses are waiting for action and all Americans remain in danger of asbestos exposure.

“The momentum for ARBAN is strong. Numerous stakeholders have repeatedly shown their unwavering support to the U.S. House of Representatives. Most recently, in a September 28th letter, the International Association of Fire Fighters’ stated, ‘Every day across America, firefighters rush into burning buildings to save lives and limit property loss. As a result, firefighters experience a higher risk of unsafe exposure to asbestos compared to the general population.’

As AFL-CIO stated in their September 29th letter, “Working people have the right to a safe job, including protections from toxic substances. A ban on new asbestos and an assessment of the risks of in-place asbestos are crucial to prevent disease and protect our nation’s workers’ lives and livelihoods.”

“Thirteen asbestos experts, with a combined 300 years of experience, sent Congress a video message about the deadly health impact of asbestos and the need to ban asbestos.

“The House Committee on Energy and Commerce Majority and Minority worked hard on a landmark bill that was voted out of the Committee with overwhelmingly bipartisan support of 47-1 in November 2019. This vote proved there is a strong consensus in Congress on the need to ban asbestos and save lives.

“ARBAN is the most comprehensive asbestos ban bill in 30 years. It’s important to note that the Environmental Protection Agency (EPA) regulates the production and distribution of commercial and industrial chemicals under the Toxic Substances Control Act (TSCA). As an amendment to TSCA, ARBAN would prohibit the manufacturing, processing, and distribution in commerce of asbestos-containing mixtures and articles containing asbestos and the Libby Amphibole Asbestos, all of which are subject to TSCA. The Federal Food and Drug Administration regulates cosmetics and personal care products, such as talcum powder, not the EPA.

“We are hopeful that House Leadership will schedule another vote soon so ARBAN can move to the Senate for consideration. ADAO and our fellow ARBAN stakeholders remain dedicated to passing H.R. 1603 this year. It is a lifesaving bill that will protect Americans from a deadly and dangerous carcinogen. The time to pass it is now.”