ADAO Press Release: 18 Attorneys General Speak Out in Support of Bill to Ban Asbestos in the United States 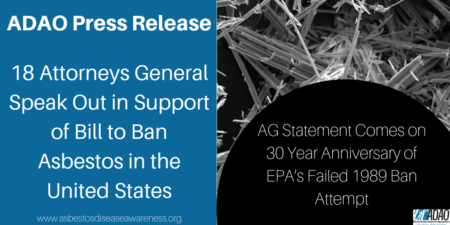 “The protections afforded by the Reinstein Bill are necessary now because EPA clearly has demonstrated that it is unable and unwilling to use its authority under TSCA to address the unreasonable risks of injury to health and the environment posed by asbestos,” the AG letter states.

“This is a major step forward in our fight to ban asbestos. It is the first time in history 18 AGs have come out in support of federal legislation to ban asbestos,” said Linda Reinstein, president and cofounder of the Asbestos Disease Awareness Organization (ADAO).

The AGs powerful letter was sent on the 30th anniversary of the last time the federal government attempted to ban asbestos. Since the EPA failed in 1989 to ban asbestos, an estimated one million Americans have died from asbestos-caused diseases, while more than $100,000,000 U.S. dollars have been spent buying asbestos. Last year alone, 750 metric tons of raw chrysotile asbestos were brought into the country, for use in one industry — the chlor-alkali industry, which uses asbestos in its production of industrial chlorine and caustic soda.

Congressman Frank Pallone (NJ-6), Chairman of the Energy and Commerce Committee and cosponsor of ARBAN in the U.S. House (H.R. 1603), commended the coalition of Attorneys General for taking decisive action on this issue.

“It’s both devastating and inexcusable that asbestos continues to kill nearly 40,000 Americans every year, a full 40 years after the Environmental Protection Agency began the process of banning it. The delays must end. I’m grateful to have the support of these Attorneys General, who represent countless families that have had their lives upended by exposure to this deadly toxin. We need to pass the Alan Reinstein Ban Asbestos Now Act, and I look forward to doing exactly that.”

“Asbestos continues to kill thousands of people in our communities every year, and it’s shocking that this deadly carcinogen is still permitted in the United States. I introduced the Alan Reinstein Ban Asbestos Now Act with Chairman Pallone to save lives,” said Congresswoman Suzanne Bonamici (OR-1).

“The compelling letter from 18 Attorneys General across the country, including Oregon’s Attorney General Ellen Rosenblum, shows that this legislation is needed and that it has broad support. I look forward to continuing to work with Chairman Pallone, Subcommittee Chairman Tonko, and all of my colleagues on both sides of the aisle to pass this bill and do what more than 60 other countries have already done – ban asbestos once and for all,” Bonamici continued.

The letter also draws concern to the fact that EPA, in its regulatory plans on asbestos, has excluded consideration of legacy asbestos which exists in millions of buildings across the country, posing the greatest risk to Americans.

Former senior EPA official Bob Sussman and ADAO counsel echoed this concern, “These are important areas where EPA has failed to use its authority under TSCA, and its inaction has left the public without critical protections that ARBAN would provide”

As the AGs released their statement, ADAO unveiled the first comprehensive EPA’s Failure to Ban Asbestos: The Impact from 1989 – 2019 on Public Health, Environment, and the Economy report revealing the impact from EPA’s past and present failures.