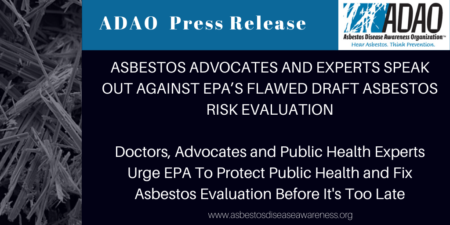 “Under Donald Trump’s EPA, our comments and docket submissions regarding asbestos have fallen on deaf ears. This was made undeniably obvious by the release of the draft Risk Evaluation for Asbestos, which contains significant flaws and deadly exclusions,” said ADAO President Linda Reinstein. “For nearly four years, ADAO and other stakeholders have urged EPA to use the Frank R. Lautenberg Chemical Safety for the 21st Century Act to ban asbestos in the United States. The risks of asbestos have been well-documented for decades. As it stands, the draft risk evaluation the EPA has proposed will perpetuate the dangers of asbestos and undermine the chance for the national ban on asbestos the nation desperately needs,”  she continued.

Each year, nearly 40,000 Americans die from preventable asbestos-related diseases. Nearly 70 other countries have banned asbestos, yet the United States remains one of the few industrialized nations who still imports and uses tons of raw asbestos each year. 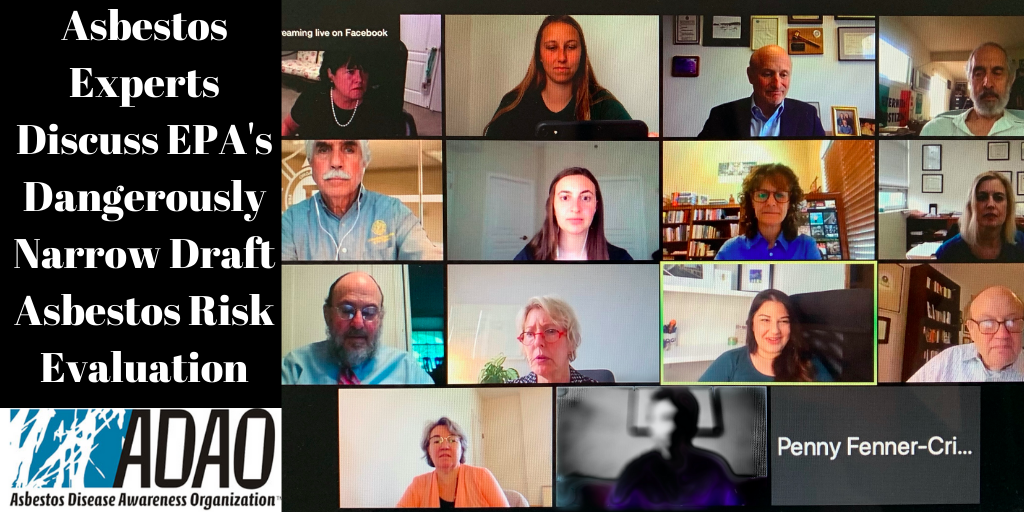 “EPA’s incomplete and un-protective risk evaluation is a big step back from the decades of high-quality work by government scientists on this extremely dangerous carcinogen,” said former EPA Deputy Administrator, Bob Sussman who serves as ADAO counsel.

“Significant asbestos exposure by consumers, workers, and within the environment continue to pose an unreasonable risk to everyone in the United States,” said Reinstein. “The evaluation, as proposed, fails to protect the public from this deadly and knowable threat. EPA continues to drag its feet and has repeatedly put chemical company concerns before protecting the public. We urge them to act, but we can’t afford to keep waiting, which is why we call on Congress to pass the Alan Reinstein Ban Asbestos Now Act (ARBAN).”

A video recording of the event is available.