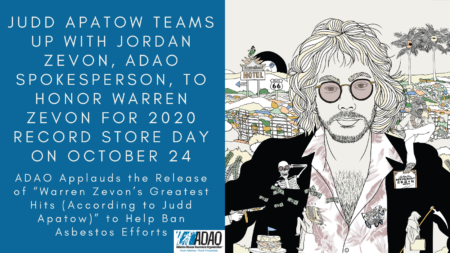 Judd Apatow, writer and director of King of Staten Island, Knocked Up, and many more smash hits, produced and curated the new collection with Bill Inglot. Available from Rhino Records, the record features Judd’s favorite Zevon hits, live performances, and deep cuts. A portion of proceeds from the album will be donated to ADAO, where Jordan Zevon has served as the National Spokesperson for 15 years. In 2003, his father, musician Warren Zevon, passed away from mesothelioma, a preventable asbestos-caused cancer that takes nearly 40,000 American lives each year.

“Warren Zevon’s honesty, wit, and storytelling has been a major inspiration in my work,” Apatow wrote for the album’s liner notes. “He is my north star. He reminds me to go deep. His music is fun, dark, and deeply emotional all at the same time. His music is always such an inspiration to me because it’s so emotional and honest and funny, and it’s just the tone I’m always trying to hit. So I owe so much to him. He really has such a gigantic influence.”

“I was blown away when Judd and Rhino Records approached me about releasing, in honor of record store day, Judd’s personally cultivated ‘Best of’ album,” said Jordan Zevon about Record Store Day and Judd’s album. “What really sent this honor and experience over-the-top was when everyone involved agreed to donate a portion  of the proceeds to ADAO. Asbestos is not banned in the U.S. and ADAO has a bill that could accomplish that if our government will do the right thing. It’s enough already.”

“ADAO is so thankful to Judd Apatow and Rhino Records for this amazing opportunity to honor Warren and support ADAO’s prevention and policy efforts,” stated ADAO President and Co-founder, Linda Reinstein. “Warren died from a preventable disease caused by asbestos, yet imports and use of the known carcinogen continue. We can honor his memory by purchasing Judd’s specially curated album with 12 of Warren’s classic hits. As we listen to Warren’s music, we can also come together to ban asbestos to save hundreds of thousands of lives.”