ADAO Hits Back On Chemistry Industry Fear Mongering And Misrepresentation 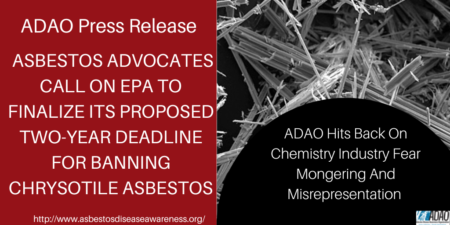 “The chemical industry is waging a reckless campaign of fear mongering and disinformation in an attempt to block the ban of a lethal chemical that kills over 40,000 Americans each year,” said Linda Reinstein, President and co-founder of ADAO. “The great majority of the chlor-alkali industry has already moved to more efficient non-asbestos technology. Just since 2016, the number of plants using asbestos diaphragm has declined from 15 to 8. It’s time for the three remaining producers – Olin Corporation, Occidental Petroleum Corporation, and Westlake Chemical Corporation – to step up and stop importing hundreds of tons of raw chrysotile asbestos from unsafe mines in Brazil, Russia and China.

“It is misleading for the industry to warn that EPA’s rule is putting the drinking water supply at risk. Only seven percent of total chlorine and caustic soda production is used for water treatment,” said Reinstein. “These three producers can easily address any shortfall by reallocating a small amount of chlorine to the water treatment sector from the much larger amount they use for polyvinyl chloride (PVC) and plastic production. There is no safe level of asbestos exposure or use, period. Americans have already paid the ultimate price for asbestos — with our lives.”

“The proposed EPA rule gives the industry two years to eliminate asbestos from the few remaining plants that use it,” said ADAO counsel Bob Sussman. “EPA has concluded, and we agree, that this is enough time to transition to non-asbestos technology. EPA has also found that transitioning  chlor-alkali plants using asbestos will actually save the industry money because of the greater efficiency of the replacement technologies.”

Sussman added, “The benefits of the proposed rule are not just economic, but include preventing the suffering, disability, death, and medical costs that victims of asbestos exposure endure. The analysis in our comments shows that the lives saved and diseases avoided by EPA’s proposed rule are worth several million dollars each year – a benefit to society that the industry ignores.”

While EPA continues its important and necessary rulemaking, ADAO urges Congress to act now and ban asbestos to fully protect public health from this silent killer. The recently introduced Alan Reinstein Ban Asbestos Now (ARBAN) Act of 2022, named for the late husband of ADAO’s co-founder and president, would ban all commercial importation and use of all six recognized asbestos fiber types, winchite and richterite– providing more comprehensive public health protection than EPA’s rulemaking, which is limited to six uses of one fiber, chrysotile.