Skip to content
Home/Blog/ADAO Resource: NEARLY 70 COUNTRIES HAVE BANNED ASBESTOS BUT THE USA IS NOT ON THE LIST

ADAO Resource: NEARLY 70 COUNTRIES HAVE BANNED ASBESTOS BUT THE USA IS NOT ON THE LIST 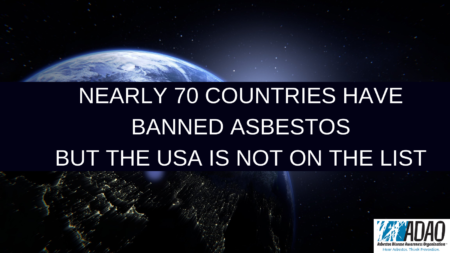 For decades, science has shown that all types of asbestos cause lung cancer and mesothelioma, according to the World Health Organization, as well as cancer of the larynx and ovary, and asbestosis (fibrosis of the lungs). Exposure to asbestos occurs through “inhalation of fibers in the air, in the working environment, ambient air in the vicinity of point sources such as factories handling asbestos, or indoor air in housing and buildings containing friable (crumbly) asbestos materials.” There is no safe level of exposure.

To date, nearly 70 nations have enacted federal legislation to prohibit the use, imports, and/or mining of asbestos. Beginning in 1983, when Iceland prohibited asbestos imports other countries began to follow their lead by passing ban legislation.  Norway did the same in 1984 and several Middle Eastern countries followed suit in the 1990s, including Kuwait (1995), Bahrain (1996), and Saudi Arabia (1998).

Thanks to the Asbestos Safety and Eradication Agency and the International Ban Asbestos Secretariat, ADAO has compiled the below list of countries that have banned asbestos. As you can see, the United States is the only industrialized western country who has not banned asbestos. Over 40,000 Americans each year die from asbestos-caused diseases, and there is legacy asbestos found in our homes, schools, workplaces, and in our air, water, and soil.

It is time we ban asbestos, and protect public health, like the rest of these countries.

The international ban asbestos list is compiled from The Asbestos Safety and Eradication Agency and the International Ban Asbestos Secretariat, and ADAO’s research.