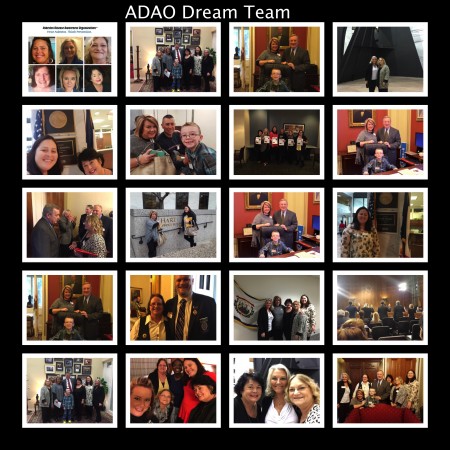 The Asbestos Disease Awareness Organization (ADAO) is reenergized after completing another successful and productive trip to Washington DC. ADAO attended the February 3, 2016 Senate Judiciary’s  FACT Act Hearing, “The Need for Transparency in the Asbestos Trusts” as well as numerous Senate meetings.  Susan Vento, widow of U.S. Congressman Bruce Vento from Minnesota, was one of the five witnesses. Her powerful testimony against the FACT Act was heard and felt by all. At the hearing, Senator Richard Durbin (D-IL), a strong advocate for asbestos victims and an asbestos ban, vehemently stated “as companies continue to import hundreds of tons of asbestos into the U.S. each year, workers, first responders and others continue to be exposed, especially when buildings are renovated or demolished. The FACT Act puts onerous burdens on victims and asbestos trusts, but does nothing to protect innocent Americans from exposure to asbestos.”

Senator Durbin’s recent press release states that the FACT Act also allows asbestos companies to demand any information they want from an asbestos trust at any time about any trust claimant. This permits defendants to drag out litigation through endless information requests for which trusts would have to spend thousands of hours complying. Consequently, many victims would die while waiting for compensation.

During our meetings, Senate staffers listened and better understood how the FACT Act would delay asbestos victims’ compensation, jeopardize their security, and divulge personal information.  The ADAO “Dream Team” passionately shared their stories, expressed their opinions of preventing asbestos exposure to eliminate asbestos-caused diseases and voiced their opposition to the FACT Act (S.357).

Additionally, the ADAO Dream Team joined victims, family members and veterans impacted by asbestos-related illnesses at a meeting with Senator Durbin after the hearing. We discussed his ADAO-supported bill, the Reducing Exposure to Asbestos Database (READ) Act (S. 700) as well as opposition to the Furthering Asbestos Claims Transparency (FACT) Act (S. 357).

Further to attending the Senate hearing and multiple Senate meetings, ADAO also submitted 20 letters from asbestos victims and their families from 18 States. The letters will be entered into the Senate Committee on Judiciary hearing record.

Although we made incredible progress on this Washington D.C. trip, there is so much more to do to educate Congress:

ADAO is going back to Washington D.C. with another Dream Team for our ADAO’s 9th Senate Staff Briefing: “Asbestos: Impact on Consumer Safety, Public Health, and Asbestos Victims’ Civil Rights” on Tuesday February 23, 2016.

Our speakers will be:

We are being heard and confirm again that together, we can make change happen.