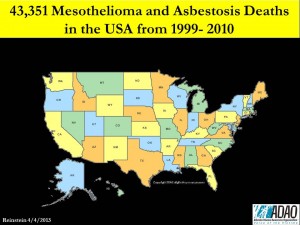 Asbestos, a human carcinogen, has caused one of the worst man-made environmental disasters. The facts are irrefutable, yet each day, 30 Americans die from a preventable asbestos-caused disease.

Exposure to asbestos can cause mesothelioma and lung, gastrointestinal, laryngeal, and ovarian cancers, as well as non-malignant lung and pleural disorders. The National Institute for Occupational Safety and Health (NIOSH) database statistics revealed that, from 1999 – 2013, the USA buried 43,351 Americans who died from mesothelioma and asbestosis – just two of the many diseases caused by asbestos.

In response to this continued public health crisis, eighteen months ago, I began asking five questions:

What seems simple isn’t always easy. I have been unable to get answers to any of my questions due to U.S. Code Title 13, Chapter 9, Section 301(g), which protects the confidentiality of export data collected by the U.S. Census Bureau. This roadblock led me to a different question: Why is the United States “dependent on imports to meet manufacturing needs,” as the U.S. Geological Survey (USGS) states? 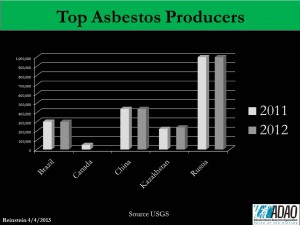 According to the USGS, in 2012, the U.S. imported 1,060 metric tons of asbestos, all of which was chrysotile asbestos from Brazil.  Brazil is the world’s third largest asbestos producer. Government data confirms that the chloralkali industry accounted for an estimated 57% of U.S. consumption in 2012, while roofing products accounted for about 41%.

Asbestos is deadly, and remains a consumer, environmental, and occupational threat. The USGS has stated for decades that “numerous materials substitute for asbestos in products.”  The federal government and individuals are still funding remediation, rehabilitation, and abatement for decades of asbestos use at a high price in dollars and lives. Nonetheless, the USGS foresees that “U.S. asbestos consumption is likely to remain near the 1,000-ton level, as it has in the past 4 years.”

According to the Center for Public Integrity, the American Chemistry Council released a statement saying, “Diaphragms made of asbestos are a critical separation medium in the chlorine manufacturing process. Chlorine is essential for manufacturing life-saving medicines, producing solar cells, and providing safe drinking water.” The statement asserted that chlorine producers “work to manage the risks and potential adverse effects to human health and the environment” and “workers potentially exposed to asbestos are protected by wearing appropriate personal protective equipment and following strict work processes.” 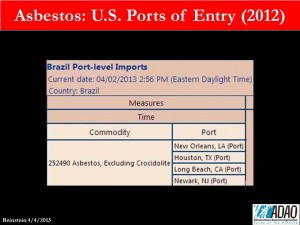 Asbestos diseases have a 10 – 50 year latency period from initial exposure to the time patients are diagnosed with incurable asbestos-caused diseases.  Most patients die within 6-12 months of diagnosis. Despite the irreversible harmful health effects of asbestos exposure, the American Chemistry Council statement continues: “Employees in the chlor-alkali industry are given annual medical examinations to determine whether an employee has incurred any adverse effects due to any possible exposure.”

Eternit S.A. was established in Brazil in 1939. The company manufactures asbestos-cement products, as well as non-asbestos cement, plaster and plastic products. SAMA, an Eternit S.A. subsidiary, is involved in the extraction and processing of chrysotile asbestos mineral/ore.

As a publicly traded company, Eternit’s profile is accessible to the U.S. government and investors. Eternit S.A. openly states that they manufacture various asbestos cement products, including tiles, water tanks, and complementary parts, and the company is also involved in the exploration and sale of chrysotile mineral/ore. In Brazil, chrysotile is mainly used in fiber cement products (asbestos cement) as corrugated roofing, flooring boards, partition panels and water tanks. 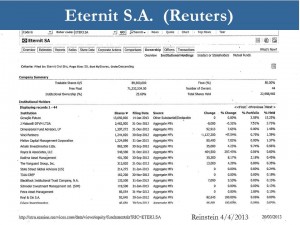 On April 1, 2013, the first day of Global Asbestos Awareness Week, U.S. Surgeon General Regina Benjamin released a public statement about the dangers of asbestos exposure. In her statement, Benjamin recognized the inhaling asbestos fibers leads to serious diseases, including lung cancer, mesothelioma, and asbestosis. She stated, “I urge Americans to learn about the dangers of asbestos exposure.”

ADAO calls on the U.S. Congress to immediately take action to stop asbestos imports and pass ban asbestos legislation.  As I remind Congress, “One life lost to a preventable asbestos-caused disease is tragic; hundreds of thousands of lives shattered is unconscionable.”

View the complete PowerPoint on SlideShare below: