WASHINGTON, D.C. — “Today is the fourth anniversary of what should have been momentous progress towards banning asbestos, but instead, we have remained stagnant 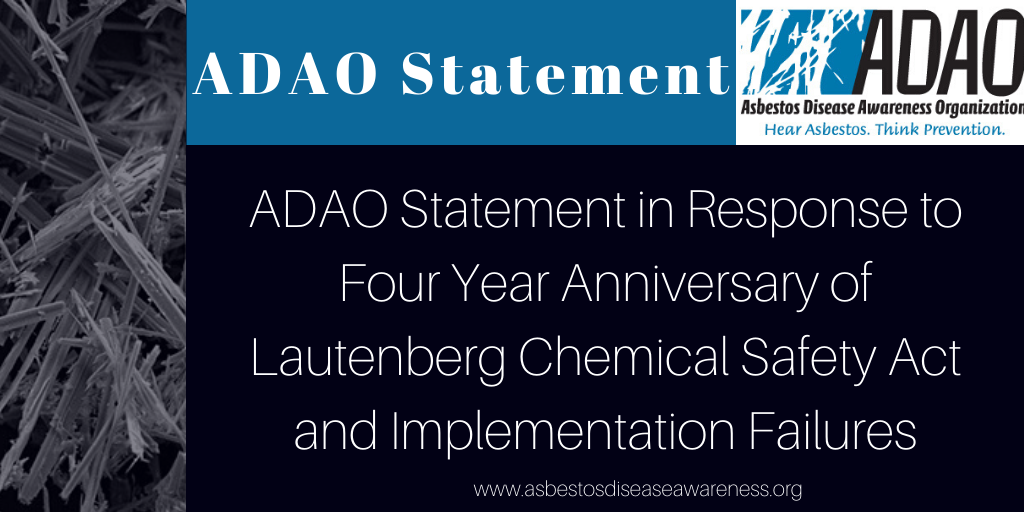 while the EPA has failed us again and again,” said Linda Reinstein, ADAO President and Cofounder and “Trump’s EPA has made numerous attempts to thwart implementing the Lautenberg Chemical Safety Act (LCSA), from the SNUR to their ludicrous risk evaluation for merely one of the six asbestos fibers. Anything less than an evaluation of all fibers, all diseases, and all uses is an insult to Americans’ health and our environment. ADAO and others will hold the EPA accountable within the agency, through legislation, or the law to end the man-made asbestos disaster. Enough — it’s time to join nearly 70 other countries and ban asbestos.”

Robert Sussman stated, “The first four years of the new TSCA have been deeply disappointing to members of Congress and the public who hoped that EPA would finally make progress on dangerous chemicals that put Americans at risk. Nowhere are these dashed expectations more stark than in the case of asbestos,  a lethal substance that EPA banned in 1989, only to have the ban overturned in the courts because of obstacles in the old law. Since Congress has now removed these obstacles, EPA no longer has an excuse for inaction but its half-hearted, inadequate and weak efforts make it increasingly unlikely the Agency  will meaningfully reduce the enormous toll of death and disease that asbestos continues to place on the American public.”