Skip to content
Home/Blog/ADAO Testifies at EPW Subcommittee Legislative Hearing on S. 4244, “Legislation to Prohibit the Manufacture, Processing, and Distribution in Commerce of Asbestos” on June 9th, 2022

ADAO Testifies at EPW Subcommittee Legislative Hearing on S. 4244, “Legislation to Prohibit the Manufacture, Processing, and Distribution in Commerce of Asbestos” on June 9th, 2022 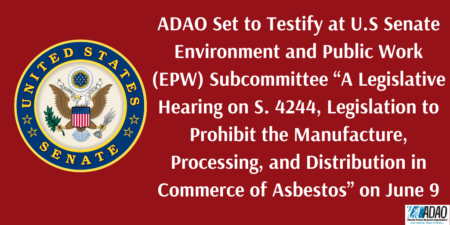 The Asbestos Disease Awareness Organization (ADAO) was honored to testify today before the U.S. Senate Committee on Environment and Public Works during the “Ban Asbestos Now: Taking Action To Save Lives And Livelihoods” Hearing.

This legislative hearing is a landmark step forward for the bicameral Alan Reinstein Ban Asbestos Now (ARBAN) Act of 2022 and proves once again that there is bicameral support for an asbestos ban. We have lost over one million Americans since 1991, the last time our government tried to ban asbestos, but failed. Yet we have known since the 1960s that asbestos is a deadly carcinogen that causes illnesses including mesothelioma, asbestosis, and cancers of the lung, larynx, and ovaries.

Nearly 70 other countries have banned asbestos. Asbestos is the most hazardous substance in widespread use since the industrial revolution. The United States is the last industrialized nation to outlaw imports and use of the known carcinogen. Since the EPA tried to ban asbestos in 1989, more than 410,000 metric tons of raw asbestos have been imported. And a ban is needed now more than ever before; in the first quarter of 2022, raw asbestos imports into the country exceeded the total amount of asbestos imported in 2021, 114 metric tons and 100 metric tons respectively.

Alternatives to asbestos-containing diaphragms for chlor-alkali plants exist, and the use of alternatives, specifically membrane cells, accounts for almost half of the country’s chlor-alkali production. It is clear that alternative methods exist and are efficient.

The economic cost of inaction has been and remains immense. According to a WHO report “Asbestos Economic Assessment of Bans and Declining Production and Consumption,” the “substantial costs associated with the continued use of asbestos potentially outweigh any other economic benefit. The annual global health care costs associated with the health effects of asbestos are estimated to be  $2.4–3.9 billion USD, excluding the additional costs of pain, suffering and welfare losses.” When it comes to banning asbestos, it’s not a matter of if, but when.

ADAO hopes that this hearing was the first step towards getting this bill to President Biden’s desk and finally getting it signed into law.