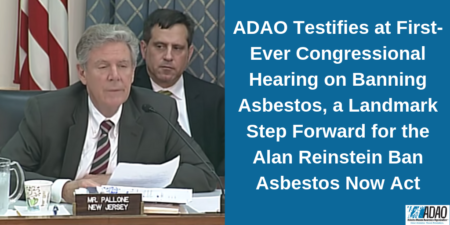 On Wednesday, May 8th, I had the immense honor of testifying before the U.S. House Energy and Commerce Subcommittee on Environment and Climate Change during the legislative hearing entitled, “Ban Asbestos Now: Taking Action To Save Lives And Livelihoods” to build on H.R. 1603, the Alan Reinstein Ban Asbestos Now Act of 2019.

Although this was the fifth time I testified on behalf of ADAO and our community, this was the first time the U.S. House has ever held a hearing on a bill to ban asbestos.

The first hearing witness was Alexandra Dunn, the Assistant Administrator of the EPA’s Office of Chemical Safety and Pollution Prevention. 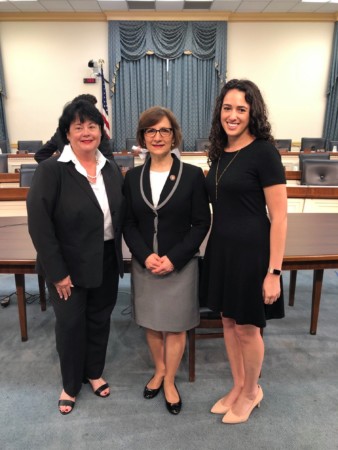 Myself, Representative Suzanne Bonamici, and my daughter Emily

[from] out of the country, [why are we] not regulating it?” he asked.

Despite these revelations, EPA’s Alexandra Dunn used the hearing to celebrate her Agency’s recent SNUR, a net-negative policy change that has been recklessly misrepresented as an asbestos ban, even though it does not come close to banning asbestos Assistant Administrator Dunn called the SNUR “very important,” and claimed that it put the Agency in a position to better regulate asbestos. Public health groups from all around the country have disagreed.

Dunn’s characterization of the SNUR also ran contrary to the bombshell New York Times story “E.P.A. Leaders Disregarded Agency’s Experts in Issuing Asbestos Rule, Memos Show” —released just hours before the hearing—about the emails ADAO received from career scientists on the Environmental Protection Agency’s (EPA) staff voicing their concern about to the exclusions in the risk evaluation and the “Significant New Use Rule” SNUR issued in April 2019.

As we began to prepare for Panel Two, I placed one of the last photos ever taken of Alan on the table.

I testified as part of a panel comprised of four witnesses: 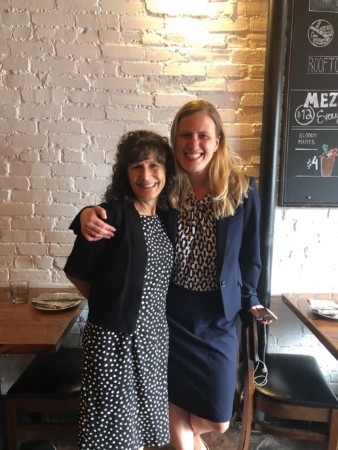 Celeste Monforton of APHA, and Rebecca Reindel of AFL-CIO

With my daughter Emily seated behind me, it almost felt surreal. I briefly shared how asbestos impacted our life but quickly moved on to how countless others have suffered or been silenced by asbestos like our family.

The facts haven’t changed since the EPA tried to ban asbestos in 1989 — all forms of asbestos, including chrysotile, are carcinogenic to humans, and there are no safe levels of asbestos exposure or controlled uses.

Alarmingly, ADAO’s new research reveals that since the EPA asbestos ban was overturned in court in 1991, more than one million Americans have died from preventable asbestos-caused diseases. These deaths represent only a snapshot in time; the total number of deaths during the past 100 plus years of asbestos use is much larger.

Most companies recognized the unreasonable risk associated with asbestos decades ago and have transitioned to safer and economically viable substitutes. Most of the world’s chlor-alkali producers use proven, efficient non-asbestos production methods, but in the U.S., this industry remains the sole user of asbestos.

Three domestic chlor-alkali producers are still importing and using asbestos and lobbying for EPA to conclude that their operations are safe. These companies are the Olin Corporation, Occidental Chemical, and Axiall/Westlake Corporation. They use chrysotile asbestos diaphragms to produce chlorine and caustic soda. Last year alone, this industry imported 750 metric tons of raw asbestos from Brazil and Russia. There are numerous exposure and risk pathways for this raw asbestos: mining, transporting between ports and plants, within the plants themselves, and disposal. 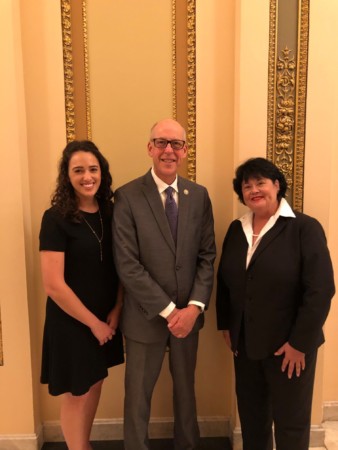 My daughter, Emily, Ranking Member Greg Walden (R-OR-2), and myself

Mike Walls, Vice President of Regulatory and Technical Affairs for the American Chemistry Council (ACC), spoke on behalf of those in the chemical industry trade association. At one point, Mr. Walls made the argument that asbestos’ role in the water treatment process justified its continued use. According to research conducted by ADAO, the treatment of water accounts for only 1% of chlorine produced by the U.S. Chlor-Alkali Industry.

The EPA is failing to implement TSCA reform as signed into law by excluding four important elements from the risk evaluation which include:

While I am immensely proud of the case that Dr. Monforton, Ms. Reindel, and I laid out, I know that the effort can’t stop there. If we expect to get ARBAN passed, the work has just begun. We need every single member of Congress to know just how many people want an asbestos ban now. Use this website and call your U.S. Senators and Representatives to tell them you support ARBAN. You can also use social media to share ADAO’s blogs, your own asbestos story, and all the reasons ARBAN matters to you.

Onward to the mark-up and floor vote — it’s certainly time to ban asbestos now without any loopholes or exemptions.