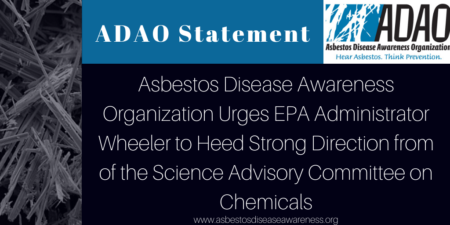 Four years ago, when the Lautenberg Chemical Safety Act was signed into law, we had high hopes that EPA could and would do their job to protect Americans from asbestos, a known carcinogen that kills nearly 40,000 Americans every year.

These hopes have been dashed. Since the release of EPA’s July 2017 Scope of the Risk Evaluation for Asbestos document, we have been voicing our deep concerns that the draft evaluation presented an incomplete picture of the current impacts of asbestos on public health, underestimated exposure and risk, and used novel and questionable methodologies that departed from previous assessments by EPA and other expert bodies.

The SAAC has fully confirmed these concerns and recommended extensive revisions to the draft evaluation. EPA would be disregarding public health and its responsibilities under TSCA if it ignored these recommendations.

Nearly 70 countries have banned asbestos, yet imports and use in the U.S. continue. Government data has confirmed hundreds of metric tons of asbestos have been imported from Brazil and Russia for the chlor-alkali industry.

While EPA reviews the SACC Report, ADAO calls on Congress to expeditiously pass the Alan Reinstein Ban Asbestos Now (ARBAN) Act of 2019, a bill that would ban all asbestos imports and use within the first year of enactment, would provide Americans with the right to know where asbestos is imported and used, and would study legacy asbestos found in structures.”