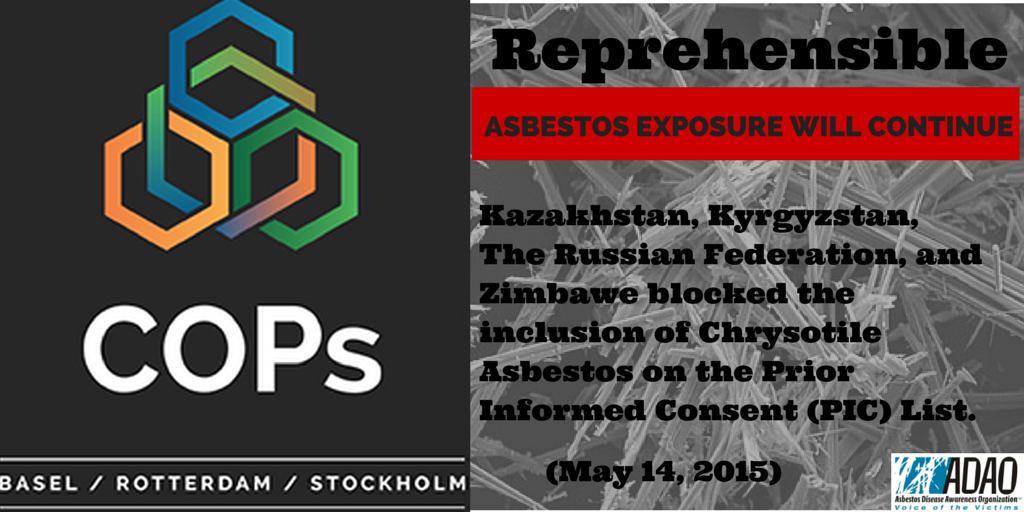 BLOCKED for the 5th time – disappointing, but NOT surprising. Kazakhstan, Kyrgyzstan, The Russian Federation and Zimbabwe blocked the inclusion of Chrysotile Asbestos on the Prior Informed Consent (PIC) List.

Cuba, India, Kazakhstan, Kyrgyzstan, Pakistan, The Russian Federation, and Zimbabwe voted to block the inclusion of Chrysotile Asbestos on the Prior Informed Consent (PIC) List. 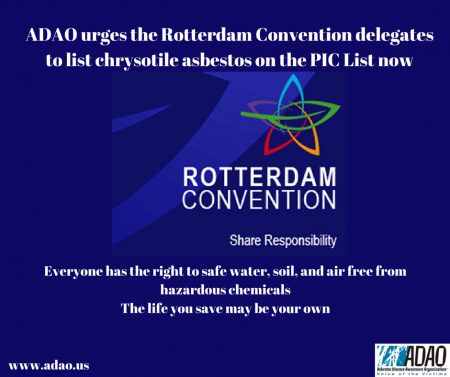 The UN Rotterdam Convention is a critical piece of the global effort to prevent exposure to toxic chemicals, including asbestos.  Join in solidarity. Be heard. Share your message of support by posting pictures, short videos, and messages to the Asbestos Free Future Facebook page here. These messages will be delivered to delegates at the convention broadcasting a “message from the world” to ban chrysotile asbestos.

As this year’s convention approaches in May, we wanted to share the history and purpose of this event with those following the battle against asbestos.

Public and official concern about the potential risks posed by hazardous chemicals and pesticides has existed  for decades. In response to these concerns, the United Nations Environment Programme (UNEP) and the Food and Agriculture Organization of the United Nations (FAO) started developing and promoting voluntary information-exchange programmes in the mid 1980’s. FAO launched its International Code of Conduct on the Distribution and Use of Pesticides in 1985 and UNEP set up the London Guidelines for the Exchange of Information on Chemicals in International Trade in 1987. Soon after, officials attending the 1992 Rio Earth Summit called for the adoption of a legally binding instrument on the Prior Informed Consent (PIC) procedure by the year 2000. The group agreed that, while chemicals could potentially be essential to fighting poverty and disease, many were also hazardous to human health. Many of the chemicals that had already been banned by Western countries were still being shipped to developing countries with little understanding of the dangers of these chemicals and a lack of communication on the best practices for how to monitor them. In response to these concerns, officials finalized text for the Convention on the Prior Informed Consent for Certain Hazardous Chemicals in International Trade in March 1998. This was adopted and opened for signatures at a Conference of Plenipotentiaries in Rotterdam in 1998 and then entered into force in early 2004. The first Conference of the Parties to the Rotterdam Convention (COP-1) was held in September 2004.

The UN Rotterdam Convention endeavored to advance responsible trade and environmental justice through sharing responsibilities related to hazardous chemicals and suggesting that all countries have a legal and moral duty to inform on exporting countries while providing the basic human right of PIC to importing countries. Any opposition to the PIC List demonstrates how the global asbestos industry is endangering the integrity and effectiveness of the Rotterdam Convention, in addition to the health and safety of citizens. As a result, countries in transition will continue to import deadly chemicals such as asbestos and, in doing so, expose their own population to their dangers.

Make sure your voice is heard. Send a message to the Rotterdam Convention by posting on the Asbestos Free Future Facebook page here.

The ADAO message to the 2015 delegates is: “ADAO urges the Rotterdam Convention delegates to list chrysotile asbestos on the PIC List now. Everyone has the right to safe water, soil, and air free from hazardous chemicals. The life you save may be your own.”