Skip to content
Home/Blog/Education/ADAO’s New “EPA’s Failure to Ban Asbestos: The Impact from 1989 – 2019 on Public Health, Environment, and the Economy” Report

ADAO’s New “EPA’s Failure to Ban Asbestos: The Impact from 1989 – 2019 on Public Health, Environment, and the Economy” Report

ADAO’s New “EPA’s Failure to Ban Asbestos: The Impact from 1989 – 2019 on Public Health, Environment, and the Economy” Report

ADAO’s New Video: 30 Years After the EPA Failed to Ban Asbestos — A Ban is Insight 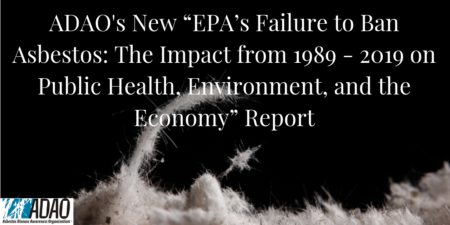 The Asbestos Disease Awareness Organization (ADAO) was founded in 2004 by two families in crisis. Doug Larkin and I met when our loved ones, Bill and Alan, were battling mesothelioma. Neither of us had ever heard of mesothelioma and learned during this trying time that it was caused by asbestos, a known carcinogen that is still legal and lethal in the United States to this day. Tragically, Bill and Alan both died from the disease.

During the past 15 years, I’ve read everything I could get my hands and eyes on — from treatment for Alan to the deadly asbestos man-made disaster. This report, “EPA’s Failure to Ban Asbestos: The Impact from 1989 – 2019 on Public Health, Environment, and the Economy” is a compilation of historical facts, new data, the latest policy efforts, and hard-hitting truths all Americans should know about asbestos prevention and policy.

This report marks a significant milestone. On July 12, 1989, the Environmental Protection Agency (EPA) issued the Asbestos Ban Phase-Out Rule, which should have banned asbestos by 1996. However, the asbestos industry fought hard and challenged the EPA in court. Just two years later the ban was overturned.

Thirty years after the EPA’s failure, disease, deaths, and imports all continue. More than one million  American families have lived through the same horrors that the Larkin and Reinstein families experienced: losing a loved one to asbestos-related disease. Unfortunately these deaths come as no surprise given that figures show about $100,000,000 USD has been spent on 375,000 metric tons of asbestos imports from 1989-2019. Now, the United States of America has arrived at a moment of reckoning with asbestos. As we mark this important 30-year touchpoint, the Alan Reinstein Ban Asbestos Now Act continues to gather support in Congress. The bill seeks to enact a no-loopholes, no-exemptions ban on asbestos. Thirty years after the EPA came up short, the American people have another chance to ban this carcinogen once and for all.

It is our hope in publishing this report that we may provide the context of why and how this movement to ban asbestos is essential for furthering improvements in global public health. We hope to demonstrate both the rationale and urgency behind the movement and prevent other families from experiencing the pain that we lived through in 2004. And most importantly—after 30 years of inaction as a nation—we hope to show that the time has finally come to act on asbestos.

ADAO’s report is dedicated to the millions of asbestos victims who have suffered or died from preventable asbestos-caused diseases.