The Asbestos Disease Awareness Organization (ADAO) applauds the Attorneys General from 10 states and the District of Columbia who have filed suit under section 21 of the Toxic Substances Control Act (TSCA) to overturn Environmental Protection Agency’s (EPA) indefensible refusal to require right-to-know reporting on asbestos under TSCA. 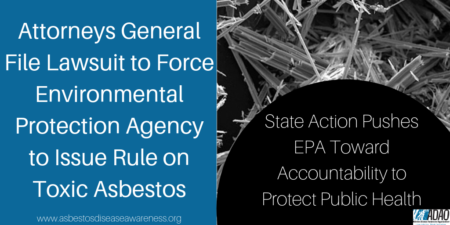 Linda Reinstein, ADAO President and cofounder, said: “I am grateful to the 10 states and the District of Columbia that are fighting to hold EPA accountable for yet another of its many asbestos failures. Without accurate and complete information about asbestos imports and use it is impossible to understand how, and in what amounts, Americans are exposed to asbestos. Yet, EPA is unwilling to take this simple common-sense step to keep people safe. We have waited years for EPA to take responsible and effective action to protect the public from this deadly carcinogen which continues to kill nearly 40,000 Americans each year. We are still waiting.

“This lawsuit is the result of EPA’s denial of the states’ petition for asbestos reporting on April 30, 2019. ADAO and other groups had earlier filed a petition to require reporting which EPA denied on December 21, 2018. Like the states, ADAO and its co-petitioners are challenging the denial of their petition in federal district court in San Francisco and look forward to working with the states as they seek to advance similar goals.

“In the face of EPA’s inaction, ADAO and many other public health advocates and stakeholders strongly support the bicameral Alan Reinstein Ban Asbestos Now Act (ARBAN) which bans the importation, manufacture, processing, and distribution of all forms of asbestos and asbestos-containing mixtures and articles, and will establish a Right-to-Know program to require current importers, processors and distributors to report and disclose to the public how much asbestos is in U.S. commerce, where and how it is used, and who is exposed.

“This legislation would bring the United States into alignment with nearly 70 other countries that have enacted similar asbestos bans. It is time to pass this federal ban on asbestos and protect public health.”