Skip to content
Home/Blog/Advocates and Industry Representatives Weighed in On TSCA Implementation at Feb. 14 EPA Meeting

Advocates and Industry Representatives Weighed in On TSCA Implementation at Feb. 14 EPA Meeting 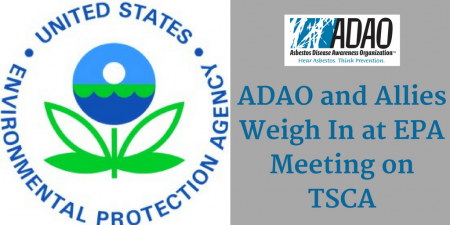 The U.S. Environmental Protection Agency (EPA) held a public meeting on February 14 to gather information about evaluating the use and risk for the top ten chemicals under the Toxic Substances Control Act (TSCA). Asbestos is on this priority list of ten, and I was glad to take the opportunity to provide comment at this meeting on behalf of ADAO and the greater anti-asbestos community.

The meeting focused on information the EPA needs for what’s called a scoping document, or an analysis of the risk posed by a chemical. Each chemical evaluated under TSCA will have a scoping document that will guide the risk assessment process. The information I shared to inform the asbestos scoping document was about where asbestos is in our environment and commerce, where it’s used in manufacturing, and the populations most vulnerable to exposure. More specifically, I addressed our concerns about the chlor-alkali’s continued used of asbestos, as well as the legacy risk we face due to decades of rampant asbestos use in construction and manufacturing.

Given Friday’s confirmation of notoriously pro-business, anti-regulation AG Scott Pruitt as EPA Administrator, speaking out on these issues takes on increased levels of importance. We as victims know how dangerous these companies can be when they remain unregulated — 15,000 American men, women, and children die each year from asbestos-caused diseases, yet imports continue despite the fact that asbestos has long been a known human carcinogen with no safe level of exposure, and substitutes.

Some of the main points I shared in my comments include:

I dedicated my short speech to our beloved Mesothelioma Warrior, Lou Williams. I showed them a recent photo of Lou so the EPA and attendees could see firsthand the incomprehensible, preventable damage caused by asbestos. There were nearly 200 people at the meeting who heard this message, as well as more than 350 who joined the meeting remotely via webinar, and countless more viewed on a socially shared livestream.

I was honored and encouraged to speak alongside many members of our Safer Chemicals, Healthy Families (SCHF) coalition, which represents more than 450 nonprofit organizations dedicated to the environment and public health. Between the coalition members who spoke, we addressed nearly every one of the top 10 chemicals as well as general issues of transparency and thoroughness in evaluation. Among coalition partners who I spoke alongside at the meeting were Daniel Rosenberg and Jennifer Sass of the Natural Resources Defense Council (NRDC); Michael Belliveau with the Environmental Health Strategy Center; Dr. Steven Markowitz of City University of New York; Brent Kynoch, Managing Director of the Environmental Information Association (EIA) and ADAO Prevention Advisory Board member; Liz Hitchcock representing SCHF; Melanie Benesh with the Environmental Working Group (EWG); Eve Gartner with Earthjustice, and Bob Sussman, who serves as legal counsel for SCHF. Other coalition members offered comment remotely, including folks from the Breast Cancer Fund and the Learning Disabilities Association. Many of us, including members who did not speak, are submitting written comments into the official record as well.

Brent Kynoch shared concerns and information on behalf of a diverse group of individuals in the construction and industrial hygiene communities:

“Because our membership is multi-disciplinary, which means we encompass building owners, regulators, training providers, remediation contractors, laboratories, consulting firms, equipment suppliers and more, EIA has rarely taken a position on any regulation or legislation that might affect our membership. This is because legislation or regulations might, for instance, affect a building owner and a contractor differently.

The chemical industry was, of course, well represented, too — though not as well as our team. The American Chemistry Council (ACC), which represents the chlor-alkali industry, had three agents speaking at the meeting.

The ACC has been pushing for an exemption from any federal asbestos regulation. They’ve argued that their use is safe, pointing to an asbestos manual that describes since the toxin is used in a wet slurry form, there’s no risk. Experts point out as many as seven possible points of exposure within the chlor-alkali industry’s use, from mining, to shipping, to disposal. In his comments at the February 14 meeting, Dr. Steven Markowitz highlighted the risk of exposures outside of a toxin’s “intended use”:

“Leaks, spills, equipment malfunction and unplanned incidents are commonplace in chemical plants. Onsite maintenance tasks occur away from the shop and, therefore take place under less controlled circumstances. These events may not reflect the “intended use” of chemical agents, but they are everyday facts in manufacturing environments. They certainly are reasonably foreseeable, and they must be considered when evaluating whether the use of toxic chemicals should be restricted.”

I was proud and encouraged to see how strongly our anti-asbestos coalition and allies showed up to speak on this important issue. ADAO has vowed to remain a stakeholder at the table throughout TSCA implementation, seeing it through to our ultimate goal of a federal asbestos ban. We see from this meeting that we’re not alone in this fight, and as we know so well, when we partner for prevention, we make change happen!