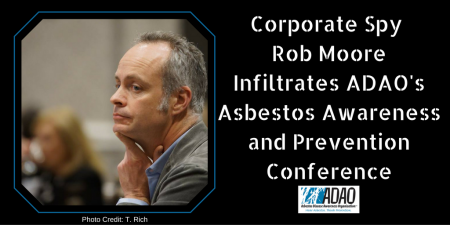 As promised, I want to update our Asbestos Disease Awareness Organization (ADAO) community about the corporate spy who infiltrated the global ban asbestos network.

A British man going by the name Robert (Rob) Moore gained access to ADAO and other international asbestos advocacy networks by posing as a journalist and documentarian. Moore attended our two of International Asbestos Awareness and Prevention Conferences in Washington, DC. He photographed what seemed like every slide from our conference presentations and conducted numerous interviews with medical experts, advocates, and asbestos victims in attendance. It appears that Moore was not taking the photos for a documentary though. In fact, he works for the consulting firm K-2, who contracted him out to spy on the anti-asbestos movement, according to The Guardian’s breaking report. Moore was reportedly paid more than £400,000 for his work, according to documents disclosed in the High Court.

The Guardian’s story reads like Hollywood script – but instead – it’s the truth. What remains to be seen is what corporate or state criminal is behind the espionage. Given the current state of asbestos use in the US, the chlor-alkali industry — which is responsible for 90% of all asbestos consumed in the country — is highly suspect. With previous heavy users switching to safer substitutes, the chlor-alkali continues to import asbestos despite an 800% spike in cost between 2000-2015.

For the asbestos victim community, betrayal is a feeling all too common. We’ve been betrayed by the companies whose negligence led to our exposure, we’ve been betrayed by a government that fails to ban this known carcinogen, so trust me — if you’re outraged, you’re not alone.

Now is a great time to live one of ADAO’s mantras and turn our anger into action. Our collective voice is loud, so let’s band together and fight back — here’s what you can do:

As a mesothelioma widow, I am personally furious ADAO was used by the asbestos profiteers to undermine today and tomorrow’s asbestos victims. I have faith in the UK High Court that the alleged spy and K2 will be prosecuted to the full extent of the law. The court will be reconvening in January, and I promise to update you as soon as I have more information. If you are concerned about any contact you may have had with Rob Moore, please email me privately at linda@adao.us.  ADAO will stand shoulder with the international ban asbestos community as we fight for truth, justice, a global asbestos ban.