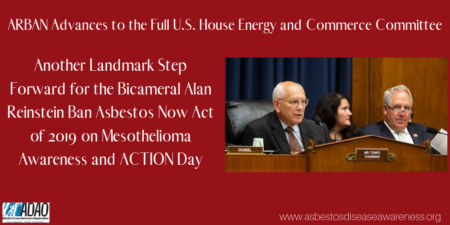 ADAO is pleased to share that the bicameral Alan Reinstein Ban Asbestos Now Act of 2019 (ARBAN) (H.R. 1603) has made another  important legislative step forward within the House of Representatives. On Thursday, September 26, commemorated yearly as Mesothelioma Awareness Day, the bill was marked up by the Subcommittee on Environment and Climate Change and has now moved forward for consideration by the full Committee on Energy and Commerce. This is another monumental accomplishment for ARBAN, as there has never been another asbestos ban bill that has made this many strides toward passage.

If the bill goes on to clear the full Committee, it will then proceed to the floor for a vote by the entire House of Representatives.

ADAO is deeply grateful to Chairman Frank Pallone (D-NJ), Representative Suzanne Bonamici (D-OR), Representative Elissa Slotkin (D-MI) and Senator Jeff Merkley (D-OR) for their work and dedication to this cause.

“This is an important step forward and one that I believe can lead finally to ending the use of asbestos in this country,” said Chairmen Pallone following the landmark step forward. “We’ve known the dangers of asbestos for decades but it’s still in use and still killing 40,000 Americans each year. That’s interesting because when I go around a lot of people think it has been banned and are surprised to find out-it hasn’t. So today we are saying enough is enough.”

As the bill moves towards full-committee mark-up, it is likely to receive even more bipartisan support as reflected by Representative George Walden (R-OR), who said, “Our talks have been very productive and staff have made real progress in negotiating a compromise to get to the best language possible. While we aren’t there yet we are getting close and we will be able to get something that will address concerns many people have voiced about asbestos.”

Although it is known that asbestos is a carcinogen that has no safe level of exposure and causes diseases including mesothelioma, lung cancer, and asbestosis, the fiber still remains legal and lethal in the United States. In fact, the U.S. is the only western industrialized nation to have not yet banned the fiber.

“It’s outrageous that in the year 2019, asbestos is still allowed in the United States,” said Senator Merkley in a press release following the mark-up. “While the EPA fiddles, Americans are dying. More than 60 other nations have already recognized asbestos as the deadly substance it is, and acted to protect their citizens with the obvious response: A ban on asbestos. It’s time for us to catch up to the rest of the developed world, and end this dangerous public health threat once and for all.”

The four key actions that the bill aims to accomplish are:

ADAO, along with the bills nearly 60 cosponsors and nearly 20 national and international organizations and unions supporters we all look forward to the next step of this process.